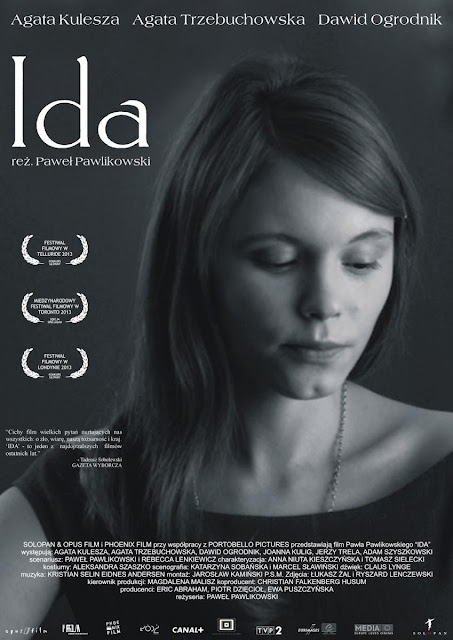 
We are so used to constant movement and compulsive cutting in American movies that the stillness of the great new Polish film “Ida” comes as something of a shock. I can’t recall a movie that makes such expressive use of silence and portraiture; from the beginning, I was thrown into a state of awe by the movie’s fervent austerity. Friends have reported similar reactions: if not awe, then at least extreme concentration and satisfaction. This compact masterpiece has the curt definition and the finality of a reckoning—a reckoning in which anger and mourning blend together. The director, Pawel Pawlikowski, left Poland years ago, for England, where he linked up with the English-born playwright Rebecca Lenkiewicz. After making documentaries for British television, Pawlikowski began directing features in English, including “My Summer of Love” (2004), with Emily Blunt, then unknown, and “The Woman in the Fifth” (2012), with Ethan Hawke and Kristin Scott Thomas. “Ida” is a charged, bitter return. Set in 1961, during the Stalinist dictatorship, the movie pushes still further into the past; almost every element in the story evokes the war years and their aftermath. The filmmakers have confronted a birthplace never forgiven but also never abandoned.

In a majestic convent, an orphaned young woman—a novice named Anna (Agata Trzebuchowska)—is ordered by her Mother Superior to visit her aunt in Lodz before she takes orders. A beautiful eighteen-year-old with a broad Slavic face, a composed, devotional manner, and a tantalizing dimple, the girl has never left the convent before and knows nothing of her family. In Lodz, wearing her habit, Anna enters the apartment of a forty-five-ish woman, who is puffing on a cigarette and waiting for the guy she picked up the night before to leave. A minor state judge and Communist Party member, Wanda Gruz (Agata Kulesza) tells her niece that her real name is Ida Lebenstein, and that she’s Jewish—a “Jewish nun,” she says. Abrupt and dismissive, Wanda enjoys attacking the girl’s ignorance. But Wanda has mysteries of her own and scores to settle: Ida’s mother was her beloved sister. The two agree to go to the village in which the parents were hidden by Christians and then betrayed—the village where Wanda grew up.

“Ida” becomes both an investigation of sorts and an intermittent road movie, featuring a dialectically opposed odd couple—Catholic and Communist, innocent girl and hard-living political intellectual, lover (of Christ) and hater (of the Polish past). Yet neither is a type, and what happens to each has to be understood as both an individual’s fate and a Polish fate. Ida’s faith and disciplined simplicity will be jostled by experience, and Wanda will be tested, too, as her own buried sorrows come back to life. Sardonic comedy lurks within the strange pairing. At first, Wanda can’t stop taunting Ida’s indifference to sex, and, about the village, she says, “What if you go there and discover that there is no God?” Yet Pawlikowski doesn’t favor one point of view over the other: the two women are equal in their isolation and their need to pull together the shards of identity in a country that has been almost entirely broken.

Between 1939 and 1945, Poland lost a fifth of its population, including three million Jews. In the two years after the war, Communists took over the government under the eyes of the Red Army and the Soviet secret police, the N.K.V.D. Many Poles who were prominent in resisting the Nazis were accused of preposterous crimes; the independent-minded were shot or hanged. In the movie, none of this is stated, but all of it is built, so to speak, into the atmosphere: the country feels dead, the population sparse, the mood of ordinary conversations constrained by the sure knowledge that many who survived have committed acts of betrayal or indulged willful ignorance.

How can you capture a nation’s spirit by telling a singular story? By making every shot as definitive as an icon. “I’m not emotionally excited by the power of cinema’s tricks anymore,” Pawlikowski has said. The director and his fledgling cinematographer, Lukasz Zal, shot the movie in hard-focus black and white; they have produced images so distinct and powerful that they sharpen our senses. “Ida” might be called static were it not for the currents of emotion from shot to shot, which electrify the women’s relation to each other throughout. Clearing away clutter, Pawlikowski almost never moves the camera; many of the scenes are just long-lasting shots, fed by a single light source that often puts the faces in partial shadow (what we understand of these two women will always be limited). Sometimes the figures are positioned at the bottom of the frame, with enormous gray Polish skies above them, as if the entire burden of a cursed country weighed on its people. Both beautiful and oppressive, the bleakness of the landscape in winter suggests something uncanny in the air, as if we were watching a horror film without ghouls.

One can trace possible influences—Carl Theodor Dreyer, very likely, and Robert Bresson, and European art films from the sixties and early seventies like François Truffaut’s “The Wild Child,” and also Polish movies made in the period in which “Ida” is set. But I can’t recall anything major that looks quite like this movie. Pawlikowski is not after commonplace realism but something you would have to call minimal realism, in which the paring away of cinematic junk makes our attention to what remains almost rapt: the clinking of the nuns’ spoons at a silent convent dinner, some gentle country sounds, the transfixing boredom of long drives through the flat landscape. Yet there’s one significant sign of life: in a provincial hotel ballroom, young musicians play Western-style Polish pop and American jazz. A handsome young saxophone player (Dawid Ogrodnik), who loves Coltrane, takes a respectful but persistent interest in Ida. The jazz, with its breaking patterns, suggests a possible opening to the West, an eventual end to Stalinist drabness, a hint of the very different Poland of 2014.

Fans of the movie have been debating who is the more interesting woman: promiscuous, alcoholic Wanda or faith-endowed Ida. On first viewing, Wanda struck me as one of the great movie characters in recent years. Agata Kulesza, a veteran Polish stage and movie actress, has short black hair, dark eyes, and an almost comically intense frown; her stare could shear the fender off a car. Earlier in her life, Wanda was a player—“the Red Wanda,” a Stalinist state prosecutor who sent “enemies of the people” to their death for the good of the revolution. As she questions peasants in her town about their acts at the end of the war, she’s both a Jewish avenger and a woman who has her own guilt to bear. Ida can’t possibly understand, but Wanda tells her of her past in brief fragments, and Kulesza does more with those fragments—adding a gesture, a pause—than anyone since Greta Garbo, who always implied much more than she said.

Without too much trouble, we can create a past for this brilliant woman. She was a member of the Young Communist League in the thirties; she escaped the Nazis by going underground and fighting in the resistance and emerged in 1947 as a true believer. It is well known that some of the Jews who survived the Nazis (often by fleeing to Moscow) entered the state service in the secret police, which, to put it mildly, was not a popular move among Polish anti-Communists (or among Polish anti-Semites, either). Wanda, we gather, was smarter than many of the others, but by 1961 she has lost her faith. Her world was not born again in revolution; it suffered a long, debilitating, and shameful aftermath to the war. Red Wanda has been twice betrayed—by the slaughter of the Jews and Polish anti-Semitism, and then by Stalinism, which she enabled. By 1961, very little keeps her going—a good apartment, surviving instincts of command, a few acid jokes, Mozart’s “Jupiter” Symphony, booze, and sexual hunger. She’s intensely likable, a tough woman too clear-headed to lie about anything, especially to herself. “Ida” may be a small story of two particular women seeking identity, but Wanda, we can’t help thinking, is Polish history, both grieved over and unredeemed.

At first glance, Ida is not as interesting—or, rather, she’s guarded, even opaque. When Wanda tells her she’s Jewish, Agata Trzebuchowska stares back, unblinking, unresponsive. Ida has nothing in her head that she can connect to Wanda’s revelations, and, for a long time, she looks at the world evenly, steadily, without much emotion. Her lustrous hair covered, her face framed by a hood, Trzebuchowska has a preternatural calm and self-sufficiency, so it’s amusing to hear that this first-time actress is actually a feminist and hipster discovered in a Warsaw café by a director friend of Pawlikowski’s. She didn’t particularly want the part; Pawlikowski, who had auditioned many young women without finding anyone he liked, had to argue her into it. The results are mixed: we get an extraordinary-looking woman, but we miss the skill of a trained actress. Trzebuchowska can’t suggest what’s churning around inside Ida, yet her opacity must be what Pawlikowski wanted, and it has its uses: it keeps mystery alive. Will Ida, exposed to the world in all its bewildering complication, maintain her faith and her desire to be a nun, or will she accept herself as a Jew? Back in the convent for a while, she prostrates herself on the stone floor, apologizing for sins that she hasn’t committed.

“Ida” is only eighty minutes long, but Pawlikowski takes his time. As the two women question farmers and townspeople in Wanda’s old village, they stop to talk things over, fight each other, or just stare silently. The investigation is urgent emotionally yet desultory in action, as such quests are in life, and the relation between the two, established and strengthened by the strategic positioning within the frame, keeps shifting, evolving, reaching a kind of emotional finality. Pawlikowski must have stripped away dialogue, too, since not much is stated: what we infer is what ultimately matters. Concentrated and expansive at the same time, “Ida” keeps the audience working hard, gathering clues, trying not to come to conclusions too quickly. As David Thomson put it in The New Republic, the movie “[dares] to omit essential actions because they have been delivered indirectly.” The violence, after all, was long in the past. What matters in 1961 (and now) is the attitudes of those who committed or suffered crimes. Without giving up judgment, the filmmakers establish that during the war, everyone in Poland was in trouble. Acknowledgment, not revenge, is the movie’s driving force.

Pawlikowski has complained about critics who see the movie solely as a meditation on the Holocaust or Poland, and, of course, he’s partially right, since “Ida” is certainly a story of identity; it’s certainly a spiritual journey, too. His irritation may be caused by a certain hostility in Poland to an exiled filmmaker who returns bristling with ideas about the country. (Pawlikowski may want to work there again, and needs to sweeten the atmosphere.) Whatever he says, he’s made a movie that breathes history in every frame, and his annoyance reminds me of D. H. Lawrence’s remark, “Never trust the teller, trust the tale. The proper function of a critic is to save the tale from the artist who created it.” All right, then: again and again, “Ida” asks the question, What do you do with the past once you’ve re-discovered it? Does it enable you, redeem you, kill you, leave you longing for life, longing for escape? The answers are startling.