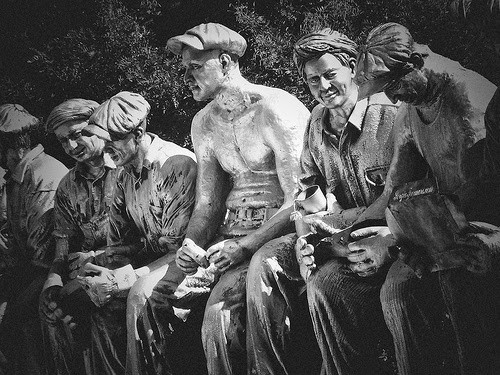 
Translated from the French by JUSTIN O’BRIEN

IT WAS THE dead of winter and yet a radiant sun was rising over the already active city. At the end of the jetty, sea and sky fused in a single dazzling light. But Yvars did not see them. He was cycling slowly along the boulevards above the harbor. On the fixed pedal of his cycle his crippled leg rested stiffly while the other labored to cope with the slippery pavement still wet with the night’s moisture. Without raising his head, a slight figure astride the saddle, he avoided the rails of the former car-line, suddenly turned the handlebars to let autos pass him, and occasionally elbowed back into place the musette bag in which Fernande had put his lunch. At such moments he would think bitterly of the bag’s contents. Between the two slices of coarse bread, instead of the Spanish omelet he liked or the beefsteak fried in oil, there was nothing but cheese.