Four years ago, the bard of New York nebbishes hightailed it to Europe and began a new chapter in his career. Here, the legendary writer and director opens up about his latest film Vicky Cristina Barcelona, his seduction by Scarlett Johansson, his return to the big apple, and how he got his modernist manhattanite mojo back.


Woody Allen started his career in show business as a teenager. He would send jokes in to the popular newspaper columnists of the day-men like Earl Wilson and Walter Winchell-who would print the jokes they liked and attribute them to Woody. He did not inform these big Broadway columnists, of course, that he was a student at Midwood High School in Brooklyn-that might kill the big Broadway sheen they liked their columns to have. One day, someone from a big PR firm asked Wilson, "Who is Woody Allen?" Wilson didn't know-the stuff came in through the mail. "Some guy in Brooklyn," he said.


The PR people located Woody and hired him to write jokes for them. When he showed up at their office on Madison Avenue, they saw right away that he was just a kid-he was 16 at the time--but they didn't care; the jokes weren't going to be attributed to him anymore. No, for $40 a week, every day after Midwood High let out in the afternoon, Woody would come in from Brooklyn on the subway, and until it was time to go home for supper, he would sit at a typewriter and write jokes. The PR people would then send the jokes to the columnists, now attributed to one of their clients: "At El Morocco last night, Jimmy Cagney was overheard saying..."


Very soon, Woody had one of the top jobs in TV, writing for Sid Caesar. But that was just a training period for him. He would go on to conquer nightclubs with his stand-up routine (if you've never heard the moose routine, you have not known true bliss), Broadway, and, of course, the movies. Depending on whether you count a couple of shorts and TV films, Woody has directed more than 40 films, all of which he has either written or co-written-including Bullets Over Broadway (1994), the picture that we did together.

Woody's latest film, Vicky Cristina Barcelona, stars his most frequent leading lady in recent years, Scarlett Johansson, along with Penelope Cruz and Javier Bardem. Shot in Spain, it's his fourth film in a row to be made in Europe-and outside his native New York, which has provided the backdrop for so much of his work. Along with the familiar hallmarks of his style, Vicky Cristina Barcelona has a new quality: there are dissolves in the film, for instance, and close-ups in a way he hasn't used close-ups for a long time. They give the film a sometimes dreamy, romantic quality. It's a quality that will probably be gone from Woody's next film-a comedy starring Larry David-because, again, he's changing subjects and genres. He's 72, but light on his feet, always looking, always open to finding new ways to explore the mess we make of our chances in this world.

This is just my opinion, of course, but of Woody's 40-plus movies, I think there are more beauties, more classics, more stop-the-channel-surfing films than any other director in American film history. Is that too grand a claim? Woody would surely have a heart attack to hear me make it, and would quickly offer what he feels to be superior choices. So, to make him happy, I'll just leave it that there are not many people who have helped both Sid Caesar and Scarlett Johansson do their best work.

DOUGLAS MCGRATH: I thought I'd start by talking to you about something that you never seem to have a shortage of: ideas. Whatever your problems might be, writer's block has never been one of them. But when the time comes to start a new project, how do you decide what you're going to do? Do you base it on wanting to do something different from what you've done before? What guides the choice?


WOODY ALLEN: It's usually that I just go into the bedroom and think and look at my notes to see if I have anything that seems interesting that's occurred to me over the year, or if anything is occurring to me at the time. The thing that is the most viable is what I do. So there's no real rhyme or reason. Theoretically, I could do two musicals in a row, or a musical and then a terribly dramatic picture or something. People think that there's more calculation to it but there isn't-it's really just chance. I consider myself lucky to get an idea, so I proceed ahead as soon as one emerges that seems to have a beginning, a middle, and an end.
DM: Do you keep a little notebook or a pad with you so that when things occur to you, as you're playing the clarinet or you're walking the kids to school, you jot them down?

SHOULD HAVE AIMED MUCH HIGHER THAN I AIMED. I MEAN, I WAS INTERESTED IN SHOW BUSINESS AND MAGIC TRICKS AND TAP-DANCING AND JOKE-TELLING-THESE WERE, YOU KNOW, THE TRIVIAL, ESCAPIST ACTIVITIES OF MY CHILDHOOD.—WOODY ALLEN 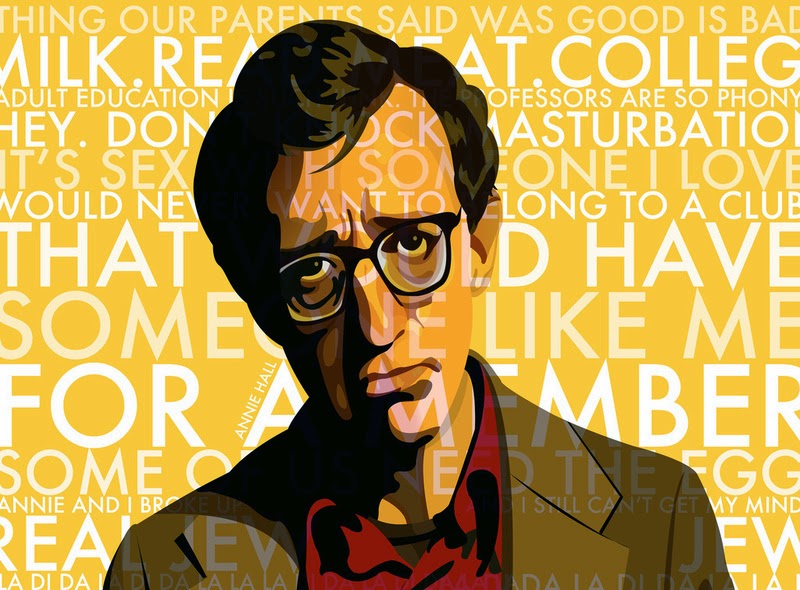 
DM: You mean someone who plays the clarinet?


WA: No, no. I wouldn't want to play the clarinet. I'd want to play the piano. I mean, I would trade my talent right now, even up, for Bud Powell's talent. That would be just fine with me. And I know I'm not picking Glenn Gould or Vladimir Horowitz-I'm picking a struggling jazz musician. But that would be fine.
DM: And you'd rather be a performer as opposed to a composer?
WA: Yes, yes. I'd rather be a performing musician. But that's something that I don't have the talent for. I mean, none of the arts are any good unless you really are great at them. If you're Matisse or Picasso or Horowitz or Bud Powell or Louis Armstrong... I mean, you really have to be great. Otherwise it doesn't mean very much.
DM: What's the worst thing about getting older?
WA: Well, of course, your body breaks down and you're closer to death. So, you know, that's an unbeatable combination.
DM: Is there anything good about it?
WA: There's nothing good about getting older-absolutely nothing-because the amount of wisdom and experience you gain is negligible compared to what you lose. You do gain a couple of things-you gain a little bittersweet and sour wisdom from your heartbreaks and failures and things-but what you lose is so catastrophic in every way.
DM: Not a good trade.
WA: No. And, consequently, the whole thrust of science and the medical profession is to try and prevent it from happening, to try to prolong life, to keep you from dying, to keep you from getting older, to rejuvenate you. I mean, that's everybody's wish. The fountain of youth is everybody's sought-after thing.
DM:  You've written a lot about death over the years. Have your feelings about it changed at all?
WA: No. It's a no-win proposition because you know what happens? You die. Don't forget that I'm not a religious person, so you die, and you disintegrate in one way or another-either you're cremated or you decompose-and you're gone. That's it. There's no other at bat. It's one strike and you're out.
DM: Of all your films, is there one that represents what you think is the best of who you are? It doesn't necessarily have to be the best film.
WA: Well, that sort of changes from day to day with me. There's a small group of my films that I favor over the large majority of them where I feel like I achieved, you know, something worthwhile in my own terms. There are a few of those films that I'm sort of proud to have done, and I feel that if you were to show them in a festival with Truffaut's films and Antonioni's films and Fellini's films... They won't be the best, but they won't be hooted off the screen either. They could certainly serve as the hors d'oeuvres or the warm-ups to the really great films.
DM: And which of your films are those?
WA: Well, I think The Purple Rose of Cario [1985] is a film like that, and Bullets Over Broadway [1994] is one, and Zelig[1983] is one, and Husbands and Wives [1992] and Match Point [2005]-I probably have six or seven that I feel are respectable pieces of work, where I don't have to run and hide my head in the sand. You know, I've got a lot of B material. I don't have a lot of failures-real abysmal failures. I mean, I've got some of them, for sure, but I don't have a lot. I've got a lot of B material. And a quantity of F material...
DM: I guess what I'm asking, though, is if there is one of your films that tells us the most about your philosophy of life? You know, if someone couldn't meet you, and wanted to know what Woody is really like or what gives us the most sense of his worldview-his fears, his optimisms, his anxieties, his hopes-is there one film that kind of best sums that up?
WA: Well, to date-if it's just that-I would probably sayAnything Else [2003].
DM: Really?
WA: Yeah. You'd get it in a more abstract way in Purple Rosebecause clearly I do believe that reality is dreadful and that you are forced to choose it in the end or go crazy, but that it kills you. So that film does sum up a great feeling that I have about life-I mean a large feeling that I have about it. But in terms of just me personally as a kind of wretched little complaining vantz, I think you would see that in Anything Else. There's a lot of me in there.
DM: Very interesting. You're full of surprises.
WA: Well, it is me. I'm not saying that Anything Else is my best film, although, I didn't think it was a bad film at all- I think that one is better than many films of mine that were more successful. I won't say that it's never the case, but very often there's no correlation between the quality of one's work artistically and its commercial success. Everybodyknows that.

Posted by Ficciones at Thursday, December 11, 2014