Were the Golden Globes right to celebrate Woody Allen

Were the Golden Globes right to celebrate Woody Allen?

Not everyone welcomed the director's Lifetime Achievement award – particularly Mia and Ronan Farrow. So is it OK to praise his work? 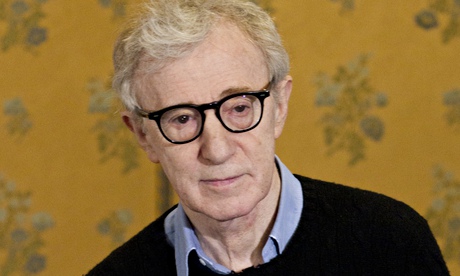 Woody Allen, who has been given the Cecil B DeMille Lifetime Achievement award. Photograph: Andrew Medichini/AP
Is it OK to celebrate Woody Allen? Many fans thought, with some relief, that this question had finally been settled, with the public beginning to relax about the public scandals that destroyed his family in the 90s, and the filmmaker himself at long last returning to professional form. (It has never been clear to me, incidentally, which was deemed by the masses to be Allen's more grievous fault: running off with his longterm partner Mia Farrow's adopted daughter, Soon-Yi Previn, or going off the boil and making dross like The Curse of the Jade Scorpion. These, shall we say, missteps seemed, in the eyes of the media, to be interchangeable, probably with some mutual causation.) Clearly the Hollywood Foreign Press Association felt all that "unpleasantness" was over when they decided to give him the Cecil B DeMille Lifetime Achievement award this year, accepted on his behalf by his former partner Diane Keaton.
But, it turned out, they were wrong. Debates about Allen's morality began to roll like angry thunder early Sunday evening when various writersvoiced their impatience with the Globes for giving Allen the prize and an awards event that in recent years has been celebrated as being one of the most fun (thank you, Tina Fey and Amy Poehler) became one of the most divisive. By the end, the anger erupted into fury:
"Missed the Woody Allen tribute – did they put the part where a woman publicly confirmed he molested her at age seven before or after Annie Hall?" tweeted Ronan Farrow, Allen and Mia Farrow's son, when the event finished. Mia Farrow was more vague in her digs during the evening ("Time to grab some ice-cream and switch over to Girls [sic],"she tweeted obliquely minutes before the Allen tribute), but by the morning, perhaps inspired by her son, she was on the case with a vengeance: "A woman has publicly detailed Woody Allen's molestation of her at age 7. GoldenGlobe tribute showed contempt for her & all abuse survivors [sic]," she tweeted, while the photo of her sweetly smiling face sat somewhat incongruously next to her raging comment.
The Farrows have been building up to this fightback for a while. They clearly think, with justification, that the public has forgotten the real source of their anger, if it ever knew it at all. Everyone remembers that Allen left Farrow for her adopted daughter (even if this is often misremembered as "Allen left his wife for his adopted daughter" – Farrow and Allen were not married, he never adopted Soon-Yi. There is no need to make this saga more complicated than it was.) But what has since been obscured is that at the time Allen was accused of sexually abusing their adopted daughter, Dylan. Ultimately, a judge decided that the charges were inconclusive, but Allen was denied visitation rights with Dylan.
Contrary to the retrospectively written narrative that Allen's career karmically collapsed after he left Mia, he in fact directed some of his sweetest films in the immediate aftermath of that scandal, such as Bullets over Broadway and Sweet and Lowdown, before his relatively brief creative slump in the 2000s. But there is a feeling now that the good ol' Woody is back, especially since the release of the painful but brilliant Blue Jasmine. As chance would have it, or not, just as Blue Jasmine was released, the Farrows gave a now infamous interview to Vanity Fair in which they and several other of Farrow's adopted children described the damage Allen did to their family, and Mia suggested that Ronan was possibly Frank Sinatra's child, not Woody's. On top of this, Dylan (who now has a new name) described in painful detail the abuse she suffered as a child. Whatever happened back in the 90s, there is no doubt that this family was devastated and continues to suffer, and whatever queasiness one might have felt at Mia's use of her (adult) children in that interview, they all clearly want the public to know this, by whatever means necessary, and it takes a cold heart to not to have sympathy for them. They all, Allen included, lost their family.
Allen's persona and life have always been a major part of his work. Every actor who plays the lead in an Allen film sounds like they're doing an Allen impression – even Cate Blanchett has his staccato rhythms in Blue Jasmine – and this difficulty was obvious on Sunday night. In the long montage of Allen films at the Golden Globes, Mia Farrow was completely, awkwardly omitted and movies which look, in retrospect, decidedly weird were barely shown, such as Hannah and her Sisters (in which a young Soon-Yi appears) and Manhattan (although Mariel Hemingway, who played Allen's schoolgirl lover, gave a cheery wave to the camera from the audience during the homage). Even Blue Jasmine can be read as a dig at Farrow, seeing as it's about a self-obsessed blond woman who discovers her husband is having an affair with a teenager and vengefully destroys her family, including their adopted child. Diane Keaton did not help matters by accepting Allen's award with a long speech about how great Allen is to actresses – other than the one he had a long relationship and children with, presumably – and finished by singing a creepily childish song about friendship. Keaton might have made life easier for herself, and Allen, if she'd stuck to praising the work. But then, that is difficult when it comes to Allen.
Allen is legally innocent and therefore deserving of all celebrations people send his way. But seeing as he has never been interested in awards, it was hard not to feel that the Foreign Press Association might have done him a bigger favour by leaving him be and letting him quietly get on with his work and his life. It is totally OK to celebrate Woody Allen, but that doesn't mean you have to.

Posted by Ficciones at Wednesday, January 22, 2014