Borges / A brief survey of the short story

With a quiet style and exuberant use of references, Borges scrutinised reality in short yet labyrinthine works 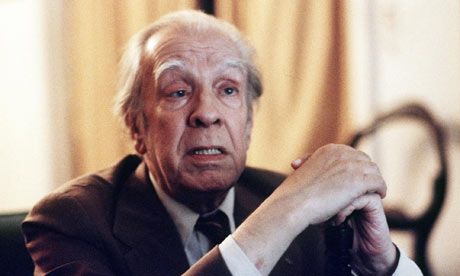 Lost for words ... Jorge Luis Borges, pictured in 1981, was deeply drawn to puzzles and enigmas in his writing. Photograph: Eduardo di Baia/AP
Speaking on a New Yorker podcast in 2007, Paul Theroux noted that Jorge Luis Borges is "a bad influence. No one [else] can be a Borges ... in terms of magic and scholarship I think he's inimitable." For Latin American writers, whether they liked him or not, he revolutionised the way language was used. "Borges is one of the authors whom I most read – and whom I probably like the least," Gabriel García Márquez once said. "I read Borges for his extraordinary ability at verbal artifice; he's a man who teaches you how to write ... to sharpen your instrument for saying things."

In 1961 Borges won a major European award, the Prix Formentor, the success increasing his renown in his native Argentina as well as throughout Europe and the United States. He shared the prize with Samuel Beckett, with whom he represents, in Brian Dillon's words, the "obscure conduit ... from modernism to postmodernism".
As a result of this reputation, a reader who is new to Borges might expect forbidding prose, but nothing could be further from the truth. "It is a quiet style," writes translator Andrew Hurley, "whose effects are achieved not with bombast or pomp, but rather with a single exploding word or phrase, dropped almost as though offhandedly into a quiet sentence." He rarely used metaphors or similes; always chose the simplest, most accurate words; almost never wrote stories longer than 10 pages – and yet created some of the most unusual and complex fiction of the last century. How did he do it?
Borges's stories agree with William Trevor's maxim that "you don't have to have a plot in a short story, but you do have to have a point". In his foreword to Ronald Christ's 1969 study, The Narrow Act: Borges' Art of Illusion, he quotes Shaw: "The writer does not work from an idea but toward an idea." The best of his works, such as The Library of Babel (which first appeared in his 1941 collection, The Garden of Forking Paths) or Death and the Compass (1942), are inquiries into the nature of reality in which supposedly orderly forms – the library, the murder mystery – prove fundamentally unstable.
This preoccupation can be seen as Borges's defining concern and is the meaning at the centre of the symbol he most frequently employs: the labyrinth. In the one hundred stories and aphorisms he wrote between 1935 and his death in Geneva in 1986, you're never far from one – whether it be an actual "web of stone", a city's streets, or a tangle of guitar notes playing a milonga. As DL Shaw notes, labyrinths "combine an appearance of design with an implied reality of futile chaos". Borges himself, in an interview with the Paris Review in 1967, hints at his own position when speaking about Kafka and Henry James: "I think that they both thought of the world as being at the same time complex and meaningless."
Many of Borges's works are hybrids – part-story and part-essay. They are so cunningly made that a friend of mine once tried ordering the book one story, The Approach to Al-Mu'tasim (1936), purports to review. Although he felt no compunction about altering or misattributing his sources, many of the allusions with which Borges's work is crowded are to genuine texts – from Johnson to Carlyle to Schopenhauer, Stevenson, Quevedo, Cicero and the One Thousand and One Nights. He called himself "a hedonistic reader" with good reason.
Such traits, alongside Borges's habit of including himself as a character in his fiction, stem from a conviction that literature, history, identity and time are infinitely mutable elements of the puzzle of existence. He believed, and memorably conveyed in Pierre Menard, Author of the Quixote (1939), that "every time a book is read or re-read ... something happens to the book". This is why Menard, who rewrites Cervantes's masterpiece word for word, is said to have written a "more subtle" book: time has modified the words' associations, making the resulting work richer. Speaking elsewhere of Cervantes's poetry, Borges wrote that "time – a friend to Cervantes – has corrected the proofs for him".
Sui generis stories such as this demonstrate Borges's true originality. Even genius bears influences, though. His are Poe, Kafka and, perhaps more surprisingly, Chesterton. Several of Borges's best stories take the form of detective fiction – a predilection best understood via Dorothy L Sayers's definition of the genre as "a pure analytic exercise". As Ronald Christ writes, the detective story is "quite formal and lucid without necessary commitment to its subject matter. And it is precisely this ability to focus on the argument or 'diagram' behind the facts that Borges finds everywhere in Chesterton." The two greatest examples of Borges's work in this area are the aforementioned Death and the Compass and Tlön, Uqbar, Orbis Tertius (1940). The latter is a conspiracy theorist's dream.
The investigative element of Borges's writing, which excites readers' natural curiosity even as it withholds detective fiction's customary satisfactions, instils a tension in his work that is rare in experimental literature. And if such rewards as the unmasking of the killer or the solution to the riddle are absent, it isn't because of perversity but because uncertainty and error are central to the stories' purpose. Borges, as David Gallagher writes, "turned the genre into a potent metaphor of human frailty and ignorance". His adventurers never discover the centre of the labyrinth, only more forking paths.

Email ThisBlogThis!Share to TwitterShare to FacebookShare to Pinterest
Labels: A brief survey of the short story, Borges, Chris Power, Writers