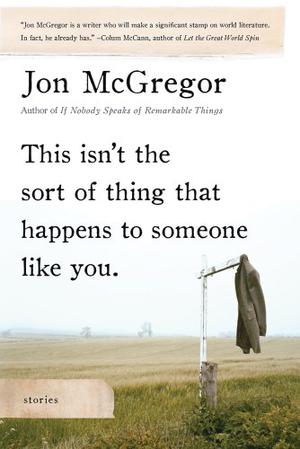 The best stories here are very good indeed. McGregor approaches his narratives elliptically and doesn’t shy away from experimentation. “In Winter the Sky,” for example, focuses on the fortunes of George, a young man who has been visiting his girlfriend. Driving home in a preoccupied state, he accidentally runs over a man, killing him instantly. Because he knows this would have a less-than-salutary effect on his future, George calmly buries the man and gets on with his relationship with the girl, eventually marrying her and taking care of his debilitated father. Years later the body is discovered, but there are no moral ramifications for George, only a little inconvenience. While McGregor conveys this narrative on the left-hand pages of the story, on the right-hand pages he gives us fragments of poetry written by George’s girlfriend/wife, poetry that gives us an alternative view of the events recounted. Another brilliant story, “Which Reminded Her, Later,” introduces us to Michael, a vicar, and Catherine, his wife. In deft strokes McGregor gives us glimpses of their earlier relationship, but by the time this story begins, they’re a long-suffering married couple. In his role as vicar (and Good Samaritan), Michael has invited a mysterious American woman into their house, a woman who spends much of her time dealing with a mysterious ailment. Catherine has little tolerance for this act of charity, and she and her husband become equally intransigent about how to deal with the situation. McGregor gives us 30 stories here, ranging from a single sentence to dense (and intense) re-creations of relationships.