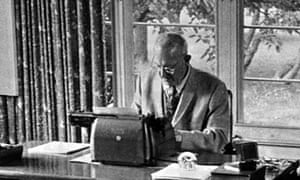 'I always feel the thing to go for is speed' … PG Wodehouse at his typewriter at his Long Island home in 1971.

Anyone wanting to learn about plotting, not to mention prose perfection, should look to Leave it to Psmith's lean, absurd genius

"I have been wondering where you would take this reading group for the book, although very enjoyable, isn't particularly nuanced or layered. What you read is all you get."
So wrote Reading group contributor AlanWSkinner wrote last week. I've been wondering too – worrying even. Leave It To Psmith offers plenty of delights. I laughed all the way through this story of impostors, jewel thieves and poets at Blandings Castle. But it's true that most of the novel's pleasures lie on the surface. AlanWSkinner may be right that there isn't much more than meets the eye. That's not a problem. But what scope does it leave for literary inquisition? 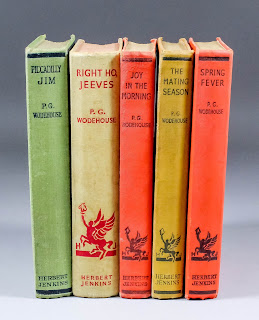 The truth is that I'd feel like I was attacking a soufflé with a pickaxe if I were to start hacking around for deep themes, dark images and political implications. Maybe it's possible to make something of the hilarious moral qualities Wodehouse ascribes to clothing. Why does he present Lord Emsworth "mould-stained and wearing a deplorable old jacket"? When we first meet Psmith, is it important that we are treated to the sight of "a very tall, very thin, very solemn young man, gleaming in a speckless top hat and a morning coat of irreproachable fit"? If this were Shakespeare I'd be looking for great significance in the similar descriptions that run throughout the book. But in Wodehouse, it just seems too much like over-explaining the joke, like attaching too much weight to an admirably light book. I think it's probably safest to assume that the only thing that really matters is that these sartorial notes are funny and help conjure up that magical inter-war world. Safe not least because burrowing any deeper would put us firmly into the camp of the poets and poseurs that Lady Constance Keeble has started to inflict on her poor old brother at Blandings Castle. And who wouldn't sympathise with Lord Emsworth when he declares: "Look here Connie … You know I hate literary fellows. It's bad enough having them in the house, but when it comes to having to go to London to fetch 'em … "


Fortunately, although I don't want to go deep, there are still things to say about Leave It To Psmith. For a start, that surface is covered in gems:
"The door opened, and Beach the butler entered, a dignified procession of one."
"My son Frederick," said Lord Emsworth, rather in the voice with which he would have called attention to the presence of a slug among his flowers."
"It contained a table with a red cloth, a chair, three stuffed birds in a glass case on the wall, and a small horsehair sofa. A depressing musty scent pervaded the place, as if a cheese had recently died there in painful circumstances. Eve gave a little shiver of distaste."
As the erstwhile editor of a series of books about Crap Towns, I also can't resist quoting the following description of the fictional Wallingford Street, West Kensington, at length:
"When the great revolution against London's ugliness really starts and yelling hordes of artists and architects, maddened beyond endurance, finally take the law into their own hands and rage through the city burning and destroying, Wallingford Street, West Kensington, will surely not escape the torch … Situated in the middle of one of those districts where London breaks out into a sort of eczema of red brick, it consists of two parallel rows of semi-detached villas, all exactly alike, each guarded by a ragged evergreen hedge, each with coloured glass of an extremely regrettable nature let into the panels of the front door; and sensitive young impressionists from the artists' colony up Holland Park way may sometimes be seen stumbling through it with hands over their eyes, muttering between clenched teeth 'How long? How long?'"
How wonderful to be in the presence of a master.
Such writing cannot be equalled. I wouldn't recommend that anyone should try. I'd also attempt to conceal from budding authors the horrifying information that Wodehouse wrote 40,000 words of this quality in just three weeks in 1922 and wrapped up the entire novel in a matter of months.
Otherwise, Leave It To Psmith should be compulsory reading for creative writing classes around the world. Especially when backed up by PG Wodehouse's own generous suggestions for a wannabe writer in a Paris Review interview given two years before his death in 1975 (a mere half-century after he wrote this novel) :
"I'd give him practical advice, and that is always get to the dialogue as soon as possible. I always feel the thing to go for is speed. Nothing puts the reader off more than a great slab of prose at the start."
In Leave It To Psmith the younger Wodehouse does just what his 91-year-old incarnation recommends. He hits the dialogue within a page of opening, and although many beautiful descriptions follow, a quick flick through suggests that there is never any more than a single page without some conversation. No danger of getting lost in details here.
In the same interview, he said:
"For a humorous novel you've got to have a scenario, and you've got to test it so that you know where the comedy comes in, where the situations come in … splitting it up into scenes (you can make a scene of almost anything) and have as little stuff in between as possible."

Again, it's all but impossible to find anything "in between". All the action takes place in clear, discrete scenes and each one leads to the other naturally and easily and with remarkable precision. It's lean. It's heading somewhere.
It almost didn't surprise me to learn that the book was successfully adapted for the stage during Wodehouse's lifetime. Almost. Because although the scenes are laid out as neatly as moody Blandings gardener Angus McAllister's flowerbeds, there's still a fiendish complexity behind them. Wodehouse also told The Paris Review:
"I think the success of every novel – if it's a novel of action – depends on the high spots. The thing to do is to say to yourself, '"Which are my big scenes?'' and then get every drop of juice out of them. The principle I always go on in writing a novel is to think of the characters in terms of actors in a play. I say to myself, if a big name were playing this part, and if he found that after a strong first act he had practically nothing to do in the second act, he would walk out. Now, then, can I twist the story so as to give him plenty to do all the way through?"
Yes, he thought about how things might work on the stage. But the crucial phrase here is "twist". The practical exercise I'd give to those lucky creative writing students would be to try to draw a schematic diagram of the plot of Leave It To Psmith, using coloured pencils, and, if they want to get really fancy, algebraic symbols for each of the characters and their movements. The resulting equations would be of fiendish complexity, there would be rainbows and arrows all over the place, leading to increasingly thick clumps where, with exquisite timing, Wodehouse has managed to land everyone in the same place at the right time. To give one quick example, the way in which he gets Psmith to Blandings Castle depends on at least three incredible coincidences, four or five bravura pieces of scene shifting that ensure Psmtih lands in a chair opposite Lord Emsworth (and recently vacated by the Canadian poet Ralston McRodd) – not to mention a quite brilliant sleight of hand to enable Psmith to convince the Earl that he is the "Singer of Saskatoon" and expected at Blandings … And that's before he meets the Honourable Freddie Threepwood on a train and the plot really gets moving.
It's a masterpiece of timing and technique and the beautiful thing is, as a reader, you hardly even hear this intricate mechanism that Wodehouse has set ticking, so wonderful is everything else. There's a famous quote from VS Pritchett about his fellow Dulwich college alumnus: "The strength of Wodehouse lies not in his almost incomprehensibly intricate plots –Restoration comedy again – but in his prose style and there, above all, in his command of mind-splitting metaphor. To describe a girl as 'the sand in civilisation's spinach' enlarges and decorates the imagination."
I don't entirely agree. I think his plots are extraordinary. Few writers are better at moving characters around the board, even if few make them do sillier things. Their complexity is part of their charm and it's no surprise that Wodehouse said:
"It's the plots that I find so hard to work out. It takes such a long time to work one out."
What is surprising is that he then added:
"I like to think of some scene, it doesn't matter how crazy, and work backward and forward from it until eventually it becomes quite plausible and fits neatly into the story."
Plausible! That's almost as funny as his intentional jokes. The other delight of the Wodehouse plot is that it is almost entirely, gloriously absurd. But still. If you want to know how to construct a story, there are definitely worse places to look than Leave It To Psmith.
Where Pritchett is right, is in saying that the real glory of Wodehouse's scenarios lies in providing a platform for all his other talents. For getting Freddie Threepwood into a situation where he might propose to Eve Halliday by stating: "I say, I do think that you might marry a chap." For getting us all wondering what Ralston McTodd means when he invites us to look "across the pale parabola of joy". For sending Baxter tumbling down some stairs in a "Lucifer-like descent". For making, in short, this work of genius possible.