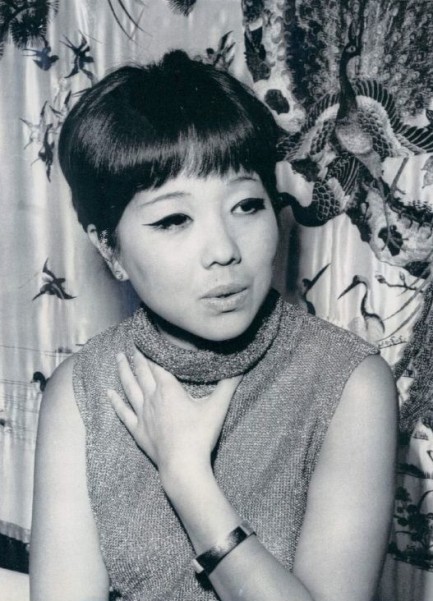 She wasn’t really a blind woman—she only played one in the movies.

Last week we watched Meiko Kaji’s Kaidan nobori ryu, aka Blind Woman’s Curse, and were too busy being cute with our summary of the film to mention that the blind woman was played by Hiroko (Hoki) Tokuda, who is better known to many people as author Henry Miller’s last wife. When they met she was working as a lounge pianist in L.A. and Miller, who had established himself as one of the most important American writers ever, was living in Pacific Palisades. Tokuda told the New York Times in 2011: “Henry started asking every week to meet me. I realized he just wanted a Japanese woman to add to his collection, and I would always ask myself, ‘Why me?’ Soon after we met, he started telling people he was going to marry me.” And marry her he did in September 1967. She was twenty-nine and Miller, who had been born in 1891, was on the verge of turning seventy-six.

By early 1970 Tokuda had left Miller and was back in Japan, where that year she filmed Blind Woman’s Curse. Miller died in 1980, and Tokuda is in Japan today, running a piano bar called Tropic of Cancer, after her ex-husband’s most famous book. She says her marriage with Miller was never consummated, which may or may not be true—Miller isn’t around to contradict her. She also says she only married him
for a green card,and has even joked about him being a bad kisser. "Terrible," she describes it. "Wet." It strikes us as a bit cynical for her to pretend the marriage was an inconvenient mistake when she’s borrowing the name of his most famous book in order to brand her bar, but that’s just our opinion. In any case, being a pulp site, we just thought we should offer a little background info, since Tokuda was married to a guy who changed English language literature forever. The above photos both date from September 1967, when their love—if it ever existed—was new.