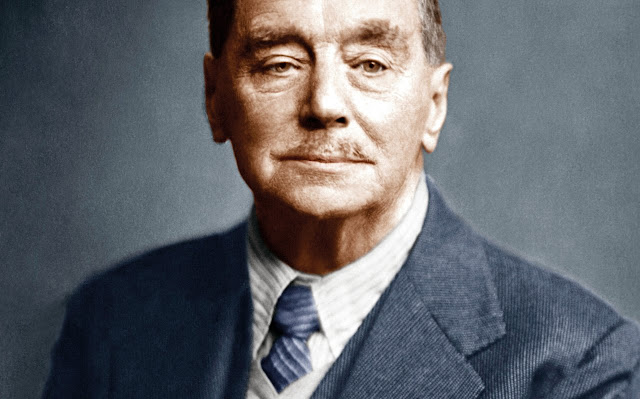 As  well  as a writer and a thinker, H G  Wells,  born 150 years ago this year, was also a tireless practitioner of 'free love'

'I have done what I pleased," H G  Wells  once wrote, "so that every bit of sexual impulse in me has expressed itself. I am a very immoral person. I have preyed on people who loved me."
This may shock readers who think of  Wells  as a science fiction guru, the author of such influential work as The Time Machine and The War of the Worlds. Yet Wells was a man ahead of his time in more ways than one. Living in an age of sexual propriety, he had a fondness for extramarital affairs which, even to modern eyes, seems startling.

We will see a lot of  Wells  in 2016. One-hundred-and-fifty years after his birth and 70 years after his death, his work still resonates. Sky Arts is currently screening a series of dramas based on his short stories. Next month, the theatrical extravaganza War of the Worlds, starring David Essex, lands in the West End. But what was the man with such a vivid, tireless imagination really like?
Certainly he was always an oddity. Born in 1866 to a lower-middle-class family, he rocketed out of his own narrow circumstances during an extraordinary four-year purple patch, when he published all of his most famous novels, starting with The Time Machine in 1895 and ending with The War of the Worlds in 1898.


The shopkeeper's son from Bromley found himself acclaimed as one of the most extraordinary minds of the age. His science-fiction melded popular storytelling with a sharp eye for emerging scientific trends and set the template for a century of the genre.
Between then and his death in 1946, however, Wells  also became one of the country's most successful and active writers and thinkers. He wrote more than 100 books of essays, world history and futurology.
Wells argued sex was 'as necessary as fresh air'

And he predicted, among other inventions, nuclear weapons, mass surveillance, tanks and a worldwide web of knowledge that would allow students to "examine any book, any document" in their own homes.
He was equally forward-looking in his personal life. In an outwardly respectable Britain where careers could be ruined by rumours of promiscuity,  Wells  preached and practised the kind of "free love" that would not become acceptable for decades.
He had dreamed since adolescence, he later wrote, of encounters with "free, ambitious, self-reliant women who would mate with me and go their way", and, after a first marriage of sexual incompatibility, he set out to turn the dream into reality.
Many of these relationships edged dangerously close to public scandal. When he attempted to flee to the Continent with Rosamund Bland, the daughter of his Fabian colleague Hubert Bland and the children's author E Nesbit, he received a duffing-up from her father at Paddington Station - though arguably Bland didn't have a leg to stand on, since Rosamund was in fact his illegitimate child by the housekeeper.
Another Fabian, Pember Reeves, is supposed to have staked out  Wells' s club with a loaded pistol after  Wells  absconded with his daughter Amber: the pair consummated their relationship,  Wells  later wrote, "before she went back to Cambridge for her examination for Part II of the Tripos".
With the novelist Elizabeth von Arnim, he enjoyed such energetic sex that they broke her hotel bed twice

But the man who later described himself as "the Don Juan of the intelligentsia" was soon busy elsewhere - not unknown to his second wife Jane, whom he claimed "had always regarded my sexual imaginativeness as a sort of constitutional disease" and who occasionally gave sanction to his dalliances.
Wells  had affairs with the writer Violet Hunt, the model for Sylvia Tietjens in Ford Madox Ford's sequence of novels, Parade's End. There was also Dorothy Richardson, who "would lecture me on philology and the lingering vestiges of my Cockney accent while there was not a stitch between us", and Martha Gellhorn (though the glamorous war correspondent always denied a sexual relationship).
With the novelist Elizabeth von Arnim, he enjoyed such energetic sex that they broke her hotel bed twice. Other affairs were more durable. Wells  had a long entanglement with the writer Rebecca West, whom he met when he was in his mid-40s and she was 21.
He also fathered a son during this relationship, the future writer Anthony West. To Rebecca,  Wells  was known as Jaguar; to him she was Panther. "He smelt of walnuts," she later recalled, "and frisked like a nice animal."
In still later life, he became obsessively devoted to the mysterious Moura, Baroness Budberg, a Ukrainian adventuress and intimate of Lenin and Stalin who may  well  have been a Soviet double agent. Among her other adventures, Budberg was for some years the lover of the diplomat and spy Robert Bruce Lockhart (supposedly the inspiration for James Bond).
It is plausible that she was reporting on her literary lover to the Russian authorities, who were fascinated by his socialist leanings, but she always ascribed  Wells' s attraction to the fact that his body smelt of honey.
Wells  was never abashed by the rumours that swirled around his private life, contending that "sex is as necessary as fresh air" and that "moral indignation is jealousy with a halo".
Outside the bedroom, he was equally progressive. He joined and abandoned the Fabian Society, judging its softly-softly approach to the socialist transformation of society too delicate.

He was a founder member of the National Council for Civil Liberties, now the civil rights group Liberty, and founded the Diabetic Association, which became the charity Diabetes UK. His extensive writings on equality and human rights informed the Universal Declaration of Human Rights, which was adopted by the United Nations shortly after his death.
Against the backdrop of an Edwardian society that still believed that people should know their place and be bound by it, he often seems to resemble one of his own time travellers, beamed in from a more permissive future to alter the course of society.
"If the world does not please you, you can change it," he observed in his novel The History of Mr Polly. "Determine to alter it at any price, and you can change it altogether."
THE TELEGRAPH