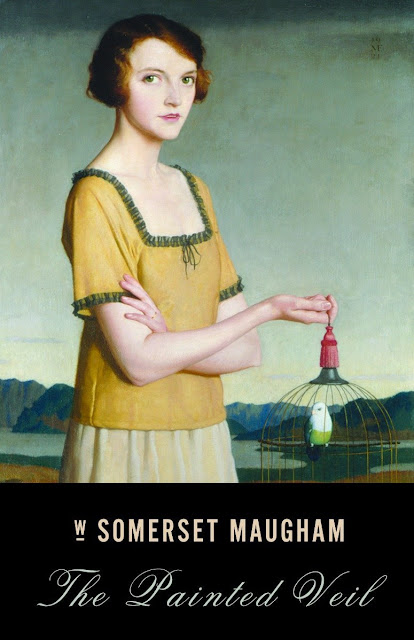 The Painted Veil by Somerset Maugham

"I thought I heard someone try the door," cried Kitty. "What's to be done if it was Walter?""Dash it all, I've left my solar topee downstairs," said Charlie.
"Well, I don't care if Walter does find out. I hate him."
"Is that the time? Must bolt."
Of course it was stupid for them to have retired to her bedroom after tiffin, but how hateful it was that neither she nor Charlie was free! What a ghastly woman Dorothy was! A good mother and an able Assistant Commisioner's wife, yes! But so old!
Coming to Hong Kong, Kitty had found it hard to reconcile herself to her husband's lowly position as bacteriologist and within three months of marriage she had known she had made a mistake. It had been her mother's fault.
Mrs Garstin was a stupid woman who, disappointed by her own husband's lack of preferment, had focused her ambitions on her prettiest daughter, Kitty. Yet despite the attentions of many admirers, Kitty had reached the age of 25 as yet unmarried and when her younger sister had secured herself a baronet she had panicked and accepted Walter Fane's offer of marriage.
For a while, Kitty had hoped Walter might improve, but once she had succumbed to Charlie Townsend's assured athleticism she could no longer fool herself that Walter was anything other than a short, ugly, charmless nonentity.
"I'm afraid you've thought me a bigger fool than I am," said Walter.
So he did know! Maybe it was for the best!
"Charlie and I are in love," Kitty sobbed, her chest heaving. "We shall be wed."
Walter laughed a cruel laugh. "Townsend will never leave his wife," he sneered. "You are just his plaything. If he promises to leave Dorothy, I will give you a divorce. Otherwise, you must come up country with me to Mei-fan-tu where I've offered to take charge of the cholera epidemic."
How awful! No parties and a fatal disease! It was social suicide!
"Oh Charlie," Kitty wept. "Walter is a beast. We must be wed as you promised."
"Steady on, old girl," Charlie said. "A chap says a lot of things he doesn't mean with his trousers down. You go off with Walter; cholera isn't so bad as long as you don't get it. Must bolt!"
Walter and Kitty barely spoke as they travelled by chair through the inscrutable Chinese hinterland. How frighteningly yellow were the faces that surrounded them! But such a relief to be met by a white man on their arrival! Even if he was bald and ugly.
"The name's Waddington," the man said. "I've cleaned out your hovel since the last missionary died here, so you should be all right. Mind if I pour myself a bottle of whiskey? Helps ward off the cholera! Ho ho!"
Walter would depart their bungalow early each morning and come home late, leaving Kitty to indulge her overwrought fantasies. How she longed to die and yet to live! But as the days passed she began to spend more time with Waddington exploring the village, and found herself reaching a new level of understanding. How shallow she had been up till now!
"Mind the corpses, there's a good girl," Waddington said in a jocular state of semi-inebriation. "Come and meet the French missionaries."
"The Holy Spirit moves in mysterious ways," said the Mother Superior. "Your husband is a saint for trying to save the coolies and you are a saint for being by his side."
How wrong they were to think she was here by choice! But how she had misjudged her husband! See how the nuns felt his nobility! Perhaps if she was to pray she could find a state of grace and love him! Maybe she could even learn Taoism from Waddington's inscrutable Chinese wife! How fat and sleazy Charlie began to seem!
"Come quickly," Waddington said. "Walter is dying."
"Forgive me, please," Kitty begged.
"The dog it was that died," Walter gasped before breathing his last.
Delirium. Or perhaps it was the last line of Goldsmith's elegy that she hadn't read yet somehow knew! If only she could cry for Walter like the stupid, round-faced coolies!
"You must stay with us," said Dorothy, on Kitty's return to Hong Kong.
"I hear you are pregnant," Charlie laughed when they were finally alone. "I hope it's mine. With any luck it's a girl; Dorothy and I only have boys."
"You are a fat, coarse shallow brute," Kitty shouted. "And I've never loved you." But even as she tried to resist him she thrust herself against him in a ridiculous plot twist and begged him to take her. How could she have done it again! She would have to return forthwith to Blighty and pay for her sins by living with her mother!
"I'm afraid your mother is dead," her father said on her return. "And I've never much cared for you, just as you've never much cared for me. I'm off to the West Indies, so you're rather on your own."
How right that she should be abandoned! She had never loved him properly! And yet there was time for them both to make amends.
"My daughter and I will come with you," she said.
"OK then," her father shrugged. "May God's bounty be with us all!"
• John Crace's Digested Reads appear in G2 on Tuesdays.
THE GUARDIAN