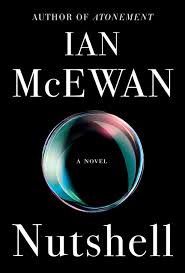 
T
his is a short novel narrated by a foetus who is also Hamlet. “Bounded in the nutshell” of (Ger-) Trudy’s womb he listens, with a cervix for an arras, to her planning to murder his father, John Cairncross, in partnership with her lover, John’s brother Claude (-ius). The state of Denmark is being played by a decaying, but entire, Georgian town house in central London, based surely on the legendarily unimproved Islington home of the poet Hugo Williams. It has been inherited by hopeless poetry publisher John, is coveted by property developer Claude and is worth a cool £8m. Though the narrator at one point has a gorgeous and explicitly Elizabethan dream – “A cold mist on the day of my desertion, a three-day journey on horseback, long rows of the English poor in the rutted lanes” – the year is mostly 2015.


This may not sound like an entirely promising read: a talking foetus could be an unconvincing or at least tiresomely limited narrator, and updatings of Shakespeare often strain at their own seams. From the start, though, McEwan manages to establish both the groggy, gripping parameters of the uterus – “My limbs are folded hard across my chest, my head is wedged into my only exit. I wear my mother like a tight-fitting cap” – and that this foetus, Hamlet-style, is “king of infinite space”. He sounds rather like Humbert Humbert in Nabokov’s Lolita; the same grand, elegiac tone; the same infinite knowledge of history and English poetry, the same covetous, obsessively physical eye. Our narrator may be compelled to share Trudy’s white wine and shuddering orgasms – “The Wall of Death … centrifugal force pins you against the wall while the floor beneath you drops giddily away” – but he can also, by grace of the author, zoom in with filmic lucidity on crucial dialogue and telling scenes. “You don’t want it then,” says Claude, offering John a Trojan horse of cash, “and with a banker’s wormy fingers collates the piles, soft-drops the edges against the surface of the desk.”Trapped in the womb rather than his dreams, this Hamlet suffers his story in reverse: he wonders if he should be born rather than if he should die; he starts with his father’s life and goes on to his ghost; he begins in silence but ends in chaos. But the familiar story retains a strong forward momentum. This can’t be a whodunnit (we know already) or even a whydunnit (the whys are as whimsical and shifting here, as profound, crazed and shallow, as in Shakespeare’s own version). So McEwan makes the story over into a brutally effective howdunnit, magnificently strong on the details of murder: the hats, gloves and waxed fingertips of it, the intimate workings of poison. Once the deed is done, he turns it into an even more effective will-be-they-be-dun-for-it, one that does not give up its secrets until the last page. 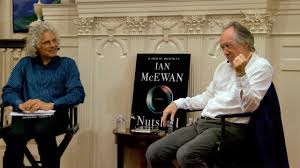 A thriller, then, but many other sorts of book too – “pastoral-comical, historical-pastoral, tragical-historical, tragical-comical-historical-pastoral”, as Polonius says to Hamlet. Claude and Trudy are Macbeth and his lady, first torturing each other with the idea that if either them fails “then all must fail, like old-fashioned Christmas lights”; then consumed by guilt and scrubbing away hopelessly at blood spots on the carpet. Trudy in her shorts and bikini tops, “pink-framed, heart-shaped sunglasses”, her constantly eroticised “apple-flesh arms and breast and green regard”, is also Lolita, corrupted and corrupting, seen from a new, deeply perverse, point of view.
The book is also historical-literary: a disquisition on the state of English poetry is embedded here, tracing a loving, masculine and conservative line from Donne to Auden, Betjeman and James Fenton; singing a lament for the small, hand-set pamphlet. Here too is a guide in miniature to McEwan’s own oeuvre: passages by turns as voyeuristically erotic as his early First Love, Last Rites, as majestically moralistic as the mid-period novels Atonement or Enduring Love, and as funny, politicised and ragged as the recent Solar. The rot of McEwan’s early The Cement Garden has moved into the grand London terraces of his recent Saturday: “The untied plastic bags rise like shining residential towers with rooftop gardens. The flies go there to graze and vomit at their ease.”
With so much going on, and such oceans of time and reference to traverse, the social satire sometimes floats adrift. John is convincing as a melancholy hero of literature, part doomed-and-noble publisher, part hapless bore; less so when he takes up with Elodie the “duck-voiced” “owl poet”, because, fine as she is, she is mostly a caricature of 2015, while he belongs to the 20th century. Trudy is even more disconnected from the contemporary: a woman born in the 80s who has never thought of work or heard of Everyday Sexism. It is hardest of all to line up the dates and times when the couple might plausibly have met and lived together for a decade. Small details clash: for all the chat of Syria and juice bars, Trudy audibly “dials” Claude on the phone, rather than texts, and never Facebooks or looks anything up on Google. Though she is said to spend her afternoon nap listening to podcasts through “earbuds”, you do feel it is more likely to be the Light Programme.
Not that it matters: the architecture wins. This book is organised so thoroughly, in its plot, characters and themes, around the central image of the foetus suspended in the churnings of gravity and time that it becomes, as Polonius also says, “scene individable, or poem unlimited”. Nutshell is an orb, a Venetian glass paperweight, of a book; a place where – and be warned, it puts you in the quoting mood – Larkin’s “any-angled light” may “congregate endlessly”. Like TS Eliot’s “Marina”, also a riff on Shakespeare, it is a consciously late, deliberately elegiac, masterpiece, a calling together of everything McEwan has learned and knows about his art: “I made this, I have forgotten / And remember. / The rigging weak and the canvas rotten / Between one June and another September / Made this unknowing, half conscious, unknown, my own.”
• Kate Clanchy’s The Not-Dead and the Saved is published by Picador. Ian McEwan is interviewed in Weekend.
THE GUARDIAN