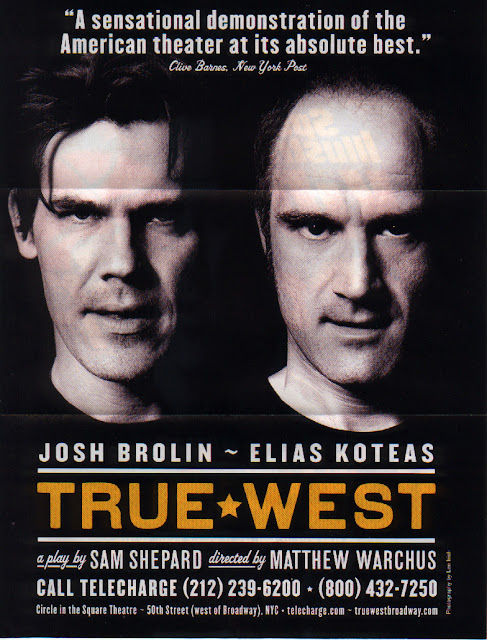 When I directed True West in 1994 at West Yorkshire Playhouse, I alternated the roles of the two brothers. Sam heard about it and sent a message to me enthusing about the idea. Then, when I was preparing to direct the film adaptation of Simpatico, I met him for the first time in a restaurant in New York. He was sitting there – leather jacket, windswept hair, rugged looks – and it was like meeting a cowboy.
When I was a teenager I had watched True West on TV, sitting on the sofa at home in a village in the middle of nowhere in North Yorkshire. I don’t think I spoke for about 48 hours after seeing it. On one level, that world of the American west was a long way from my own bleak, arable landscape. But I felt this weird, strong connection to it. And Sam was fascinated with England and with Europe. So we were extraordinarily different to each other but had much in common. Like me, he loved Yasmina Reza’s plays. There is a lot of wildness in her writing, which looks at the catastrophic breakdown of civilised behaviour. He found extremity and folly to be funny in the same way that she does. He was always chortling – he had a great sense of humour.
Sam spoke with a drawl. Talking to him, it was as if you were out camping somewhere together, sitting by the fire. He once sent me a note saying maybe we could meet up and “break some bread” – I’ve never heard anyone else use that expression. When he read from his own work, there’d be an incredibly precise, articulated voice mixed in with that drawl and he’d use that when he was reading women. His voice could be surprisingly high-pitched. He read women really beautifully, which I always found strange for someone as snaggle-toothed as he was.

I once visited him at his home in Minnesota. It was on 9/11. My then girlfriend (now wife) and I were travelling to Bismarck, North Dakota, but were stranded at Chicago airport. We got the last rental car and started driving. Twelve hours or so into it, I thought, this is a very Sam Shepard thing to be doing on such an extraordinary day in American history. And I realised we weren’t far from where he lived. I called him and said I thought we were close to his home. He gave me directions and we pulled up at his suburban house. We went up the garden path, met him and Jessica [Lange, his partner] and the TV was on showing the twin towers. We sat there watching it and drinking English tea.
Unlike some writers who balance theatre and film careers, his formative experience with the theatre was off-off-off-Broadway. He was really a part of the underground and alternative movement. Almost all of his theatre-making was like that. That’s a total difference to the world of Hollywood.
When I was preparing Simpatico, we talked a lot about horses. That was one of his great loves – along with driving long distances. He’d really light up on those subjects. Sam was a drifter: he’d appear for a few days in New York, hover at the back of a performance, laugh and drink and move on.
THE GUARDIAN