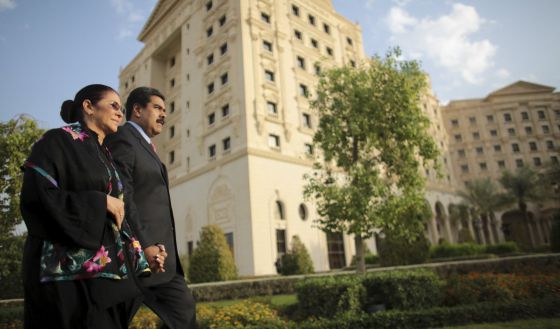 President Nicolás Maduro and his wife Cilia Flores, this past Wednesday in Riyadh, Saudi Arabia. / REUTERS
Two nephews of Venezuela’s first lady Cilia Flores were expected to appear before a federal judge in New York on Thursday on drug-trafficking charges after they were arrested by Haitian authorities and handed over to US drug agents.
Efraín Campo Flores, 29, and Francisco Flores de Freitas, whose age was not given, were detained in Port-au-Prince on Wednesday as they were allegedly supervising a 800-kilo cocaine shipment that reportedly came from Honduras, Reuters news agency reported.


The suspects reportedly showed a US undercover officer the quality of the cocaine
In a joint undercover operation, the Haitian police and the US Drug Enforcement Administration (DEA) were monitoring the two men’s movements.
They were put on a DEA plane and flown to New York, where a federal grand jury has handed down a sealed indictment against them on drug-trafficking charges.
The US Attorney’s Office for the Southern District of New York and other federal officials were unavailable for comment on Wednesday because of the national Veterans’ Day holiday.
According to news reports, Efraín Campos Flores told his arresting officers that he was Venezuelan President Nicolás Maduro’s godson and that his aunt, first lady Cilia Flores, raised him after the death of his mother. US officers rejected their diplomatic immunity arguments.
The operation began in October when the two suspects contacted an undercover DEA agent in Honduras to ask him for his help in transporting a cocaine shipment from the airport on Roatán island in the Caribbean.
In later meetings, according to a source quoted by The Wall Street Journal, the suspects took a kilo of cocaine to the US undercover officer to show him the quality of the drug, and explained that their intention was to sell it in New York. The meetings were reportedly recorded by the DEA.
These latest arrests come on the heels of several investigations taking place in New York, Washington and Miami into alleged money-laundering and drug-trafficking activities by top Venezuelan military and government officials.
Among those targeted by the DEA investigations are National Assembly speaker Diosdado Cabello and Aragua’s powerful state governor Tarek el Aissami, who once served as interior minister.


Among those targeted by the DEA investigations are National Assembly speaker Diosdado Cabello and Aragua’s powerful state governor Tarek el Aissami
Cabello, who is a former military officer, and El Aissami have both denied the allegations and have accused the US government of trying to overthrow the Maduro administration.
DEA sources have said that Venezuela has become a major transshipment point for cocaine headed to US and European markets.
This latest episode is expected to further deteriorate relationsbetween Caracas and Washington.
This isn’t the first time that Cilia Flores, 62, and her family have been suspected of illegal and unethical activities.
A lawyer, Flores served as National Assembly speaker from 2006 to 2011 and attorney general from 2012 to 2013. She was part of the legal team that defended the late President Hugo Chávez following his arrest in February 1992 for leading a coup against then-President Carlos Andrés Pérez.
Flores is now the leading candidate on the United Socialist Party of Venezuela’s (PSUV) slate for deputy in her home state of Cojedes. The parliamentary elections will be held on December 6.


Cilia Flores and her family have been suspected of taking part in suspicious activities for years
Flores has been accused throughout the years by the opposition and others of abusing her power, influence-peddling and nepotism.
In 2007 while she presided over parliament, the National Assembly Workers Union (STAN) complained to the media that the first lady had given mid-level and high legislative positions to more than 50 family members.
She took some of these relatives to the Attorney General’s Office and Presidential Ministry. Her son, Walter Gavidia Flores, and another nephew, Irving Molina Flores, have both been appointed judges while a fourth nephew, Carlos Erick Malpica, is national treasurer and a top executive at the state-run oil and gas company Petróleos de Venezuela (Pdvsa).
English version by Martin Delfín.

Posted by Ficciones at Thursday, November 12, 2015