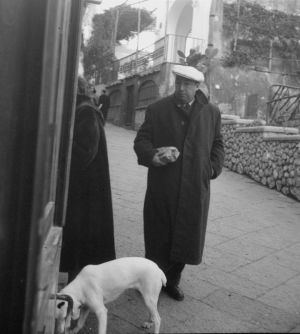 Chilean poet Pablo Neruda.
The body of the Chilean poet Pablo Neruda, who died on September 23, 1973 - 12 days after the Salvador Allende government was ousted in a bloody coup led by Augusto Pinochet - will be exhumed in the coming weeks.
Judge Mario Carroza, who is trying to clarify the circumstances of the Nobel Prize winner's death, opened an inquiry in 2011 after the Mexican magazine Proceso interviewed Manuel Osorio Araya, the poet's personal driver during the final months of his life. Osorio Araya told Proceso that Neruda was murdered by the military under Pinochet's orders. The official story for decades has been that the Communist intellectual died of prostate cancer shortly after the overthrow of President Allende.
No date has been set as to when the remains of Neruda - who is buried near his home in Isla Negra - will be exhumed, but it could be carried out as early as next month. The Pablo Neruda Foundation, which confirmed the judge's ruling on Friday after the web portal El Mostrador reported it, said it will cooperate with the investigation.

"The Foundation has always expressed its willingness to cooperate with the investigation that is to be carried out by Judge Carroza, and trusts that the experts' inquiry will be conducted with the utmost respect and care possible."
After September 11, the poet was heading into exile in Mexico with his wife Matilda. "The plan was to overthrow the tyrant from abroad in less than three months. We were going to ask the world to help oust Pinochet. But before he took the plane after he was admitted to a clinic, they gave him a lethal injection in his stomach," Araya told EL PAÍS in December 2011.

The Chilean Communist Party, which filed a complaint to clarify the causes of Neruda's death, welcomed the judge's decision. After 20 months of inquiries and statements from witnesses and experts, Carroza decided in late January to issue the order to exhume Neruda's body. Chile's Legal Medical Service (SML), which has specialized in the identification of victims of the dictatorship and has been instrumental in clarifying human rights cases, will be in charge of the exhumation.
In May 2011, the same team, with the cooperation of the Spanish forensic expert Francisco Etxeberría, confirmed that the Marxist President Allende did commit suicide in La Moneda after his remains were also exhumed.
Carroza always favored the exhumation of Neruda, but decided to conduct a preliminary investigation to determine if he could discover new evidence, 40 years after the death of the poet. In August, SML received a report stating that the poet's death was sudden, and non-violent, with "the unlikeliness that third parties participated," according to the daily La Segunda.
As was the case in Spain with the family of Federico García Lorca, who for years opposed the poet's exhumation, the Neruda Foundation was also reluctant to dig up his remains when the new allegations surfaced two years ago. "It would be a true act of desecration," said then-foundation president, Juan Agustín Figueroa, in 2011.