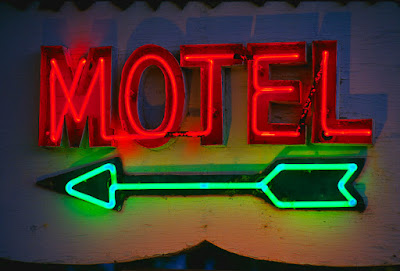 
As it happens I am in Death Valley, in a room at the Enterprise Motel and Trailer Park, and it is July, and it is hot. In fact it is 119°. I cannot seem to make the air conditioner work, but there is a small refrigerator, and I can wrap ice cubes in a towel and hold them against the small of my back. With the help of the ice cubes I have been trying to think, because The American Scholar asked me to, in some abstract way about “morality,” a word I distrust more every day, but my mind veers inflexibly toward the particular.
Here are some particulars. At midnight last night, on the road in from Las Vegas to Death Valley Junction, a car hit a shoulder and turned over. The driver, very young and apparently drunk, was killed instantly. His girl was found alive but bleeding internally, deep in shock. I talked this afternoon to the nurse who had driven the girl to the nearest doctor, 185 miles across the floor of the Valley and three ranges of lethal mountain road. The nurse explained that her husband, a talc miner, had stayed on the highway with the boy’s body until the coroner could get over the mountains from Bishop, at dawn today. “You can’t just leave a body on the highway,” she said. “It’s immoral.”
It was one instance in which I did not distrust the word, because she meant something quite specific. She meant that if a body is left alone for even a few minutes on the desert, the coyotes close in and eat the flesh. Whether or not a corpse is torn apart by coyotes may seem only a sentimental consideration, but of course it is more: one of the promises we make to one another is that we will try to retrieve our casualties, try not to abandon our dead to the coyotes. If we have been taught to keep our promises—if, in the simplest terms, our upbringing is good enough—we stay with the body, or have bad dreams.
I am talking, of course, about the kind of social code that is sometimes called, usually pejoratively, “wagon‑train morality.” In fact that is precisely what it is. For better or worse, we are what we learned as children: my own childhood was illuminated by graphic litanies of the grief awaiting those who failed in their loyalties to each other. The Donner‑Reed Party, starving in the Sierra snows, all the ephemera of civilization gone save that one vestigial taboo, the provision that no one should eat his own blood kin. The Jayhawkers, who quarreled and separated not far from where I am tonight. Some of them died in the Funerals and some of them died down near Badwater and most of the rest of them died in the Panamints. A woman who got through gave the Valley its name. Some might say that the Jayhawkers were killed by the desert summer, and the Donner Party by the mountain winter, by circumstances beyond control; we were taught instead that they had somewhere abdicated their responsibilities, somehow breached their primary loyalties, or they would not have found themselves helpless in the mountain winter or the desert summer, would not have given way to acrimony, would not have deserted one another, would not have failed. In brief, we heard such stories as cautionary tales, and they still suggest the only kind of “morality” that seems to me to have any but the most potentially mendacious meaning.

You are quite possibly impatient with me by now; I am talking, you want to say, about a “morality” so primitive that it scarcely deserves the name, a code that has as its point only survival, not the attainment of the ideal good. Exactly. Particularly out here tonight, in this country so ominous and terrible that to live in it is to live with antimatter, it is difficult to believe that “the good” is a knowable quantity. Let me tell you what it is like out here tonight. Stories travel at night on the desert. Someone gets in his pickup and drives a couple of hundred miles for a beer, and he carries news of what is happening, back wherever he came from. Then he drives another hundred miles for another beer, and passes along stories from the last place as well as from the one before; it is a network kept alive by people whose instincts tell them that if they do not keep moving at night on the desert they will lose all reason. Here is a story that is going around the desert tonight: over across the Nevada line, sheriff’s deputies are diving in some underground pools, trying to retrieve a couple of bodies known to be in the hole. The widow of one of the drowned boys is over there; she is eighteen, and pregnant, and is said not to leave the hole. The divers go down and come up, and she just stands there and stares into the water. They have been diving for ten days but have found no bottom to the caves, no bodies and no trace of them, only the black 90° water going down and down and down, and a single translucent fish, not classified. The story tonight is that one of the divers has been hauled up incoherent, out of his head, shouting—until they got him out of there so that the widow could not hear—about water that got hotter instead of cooler as he went down, about light flickering through the water, about magma, about underground nuclear testing.
That is the tone stories take out here, and there are quite a few of them tonight. And it is more than the stories alone. Across the road at the Faith Community Church a couple of dozen old people, come here to live in trailers and die in the sun, are holding a prayer sing. I cannot hear them and do not want to. What I can hear are occasional coyotes and a constant chorus of “Baby the Rain Must Fall” from the jukebox in the Snake Room next door, and if I were also to hear those dying voices, those Midwestern voices drawn to this lunar country for some unimaginable atavistic rites, rock of ages cleft for me, I think I would lose my own reason. Every now and then I imagine I hear a rattlesnake, but my husband says that it is a faucet, a paper rustling, the wind. Then he stands by a window, and plays a flashlight over the dry wash outside.
What does it mean? It means nothing manageable. There is some sinister hysteria in the air out here tonight, some hint of the monstrous perversion to which any human idea can come. “I followed my own conscience.” “I did what I thought was right.” How many madmen have said it and meant it? How many murderers? Klaus Fuchs said it, and the men who committed the Mountain Meadows Massacre said it, and Alfred Rosenberg said it. And, as we are rotely and rather presumptuously reminded by those who would say it now, Jesus said it. Maybe we have all said it, and maybe we have been wrong. Except on that most primitive level—our loyalties to those we love—what could be more  arrogant than to claim the primacy of personal conscience? (“Tell me,” a rabbi‑asked Daniel Bell when he said, as a child, that he did not believe in God. “Do you think God cares?”) At least some of the time, the world appears to me as a painting by Hieronymous Bosch; were I to follow my conscience then, it would lead me out onto the desert with Marion Faye, out to where he stood in The Deer Park looking east to Los Alamos and praying, as if for rain, that it would happen: “. . . let it come and clear the rot and the stench and the stink, let it come for all of everywhere, just so it comes and the world stands clear in the white dead dawn.”

Of course you will say that I do not have the right, even if I had the power, to inflict that unreasonable conscience upon you; nor do I want you to inflict your conscience, however reasonable, however enlightened, upon me. (“We must be aware of the dangers which lie in our most generous wishes,” Lionel Trilling once wrote. “Some paradox of our nature leads us, when once we have made our fellow men the objects of our enlightened interest, to go on to make them the objects of our pity, then of our wisdom, ultimately of our coercion.”) That the ethic of conscience is intrinsically insidious seems scarcely a revelatory point, but it is one raised with increasing infrequency; even those who do raise it tend to segue with troubling readiness into the quite contradictory position that the ethic of conscience is dangerous when it is “wrong,” and admirable when it is “right.”
You see I want to be quite obstinate about insisting that we have no way of knowing—beyond that fundamental loyalty to the social code—what is “right” and what is “wrong,” what is “good” and what “evil.” I dwell so upon this because the most disturbing aspect of “morality” seems to me to be the frequency with which the word now appears; in the press, on television, in the most perfunctory kinds of conversation. Questions of straightforward power (or survival) politics, questions of quite indifferent public policy, questions of almost anything: they are all assigned these factitious moral burdens. There is something facile going on, some self‑indulgence at work. Of course we would all like to “believe” in something, like to assuage our private guilts in public causes, like to lose our tiresome selves; like, perhaps, to transform the white flag of defeat at home into the brave white banner of battle away from home. And of course it is all right to do that; that is how, immemorially, things have gotten done. But I think it is all right only so long as we do not delude ourselves about what we are doing and why. It is all right only so long as we remember that all the ad hoc committees, all the picket lines, all the brave signatures in The New York Times, all the tools of agitprop straight across the spectrum, do not confer upon anyone any ipso facto virtue. It is all right only so long as we recognize that the end may or may not be expedient, may or may not be a good idea, but in any case has nothing to do with “morality.” Because when we start deceiving ourselves into thinking not that we want something or need something, not that it is a pragmatic necessity for us to have it, but that it is a moral imperativethat we have it, then is when we join the fashionable madmen, and then is when the thin whine of hysteria is heard in the land, and then is when we are in bad trouble, And I suspect we are already there.

Posted by Ficciones at Tuesday, September 22, 2015