If current trends continue, in just a few years all of contemporary culture will be nothing but an unending stream of cat pictures. Newspapers desperate to survive will publish only adorable kitten photos; social networks will strain under the weight of shorthairs and Siamese. The art world is already getting in on the act: witness the Walker Art Museum in Minneapolis hosting an internet cat video festival (it drew 10,000 viewers in one day), or White Columns, the avant-garde New York gallery, laying on The Cat Show, featuring "purr-formers in residence". The Brooklyn Museum recently rehung its august Egyptian collection in a display called "Divine Felines."

I wonder whether the Metropolitan Museum of Arthad our contemporary cat mania in mind when it scheduled its smart, strange exhibition of the Polish-French painter Balthus – a figurative master in an age of abstraction, and one of the creepiest figures of modern art. You may know him as an anti-modernist with a taste for young girls. His love of cats, however, receives less attention, and in this cat-saturated moment that love might become the dominant one.
The first painting, on loan from Switzerland, is a remarkable, full-length self-portrait done at the age of 27. Balthus is wearing high-waisted yellow trousers and an abbreviated necktie, stepping forward seductively with his left foot while an obese tabby nuzzles his right. On the floor, a stone tablet bears an inscription in English: "A portrait of HM the King of Cats." He earned the title. Inone almost psychedelic work, from 1949, a grinning feline of human proportions sits at a seaside cafe table; a school of fish jumps from the sea on to the cat's plate, trailing behind it a glorious rainbow. In another artist's hands this might feel tasteless. From Balthus, this is par for the course. 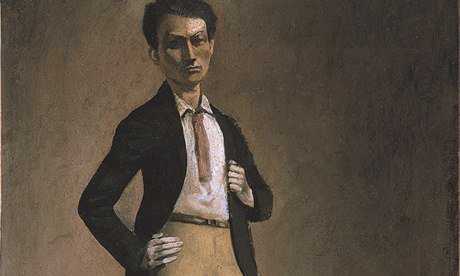 Balthus, born Balthasar Klossowski on 29 February 1908, fell for both art and cats at an early age. At 11, devastated by the disappearance of a stray he'd taken in, the young artist produced 40 memorial ink drawings, each five inches square and done in a forceful black-and-white that recalls the woodcuts of German expressionists like Ernst Ludwig Kirchner. In the first drawing, the preteen Balthus, wearing shorts, finds the cat, Mitsou, on a park bench. Soon they're snuggling together in bed, walking through the streets (Mitsou prances on a leash), sitting by the Christmas tree. In the final scene Mitsou is gone and the boy is left alone in his bedroom, sobbing uncontrollably. 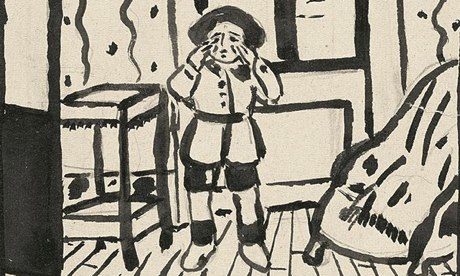 The Mitsou drawings made it into print in 1921 with a preface by Rainer Maria Rilke, a friend of the Klossowski family and, by the way, one of the lovers of Balthus's mother. Confident, musical, sweet and grim by turns, these drawings – the originals are being shown publicly for the first time, and they're the best reason to see the show – are much more than Balthus juvenilia. They're the pistol shot that began one of the most mystifying, frustrating careers in 20th-century art.
He stood at the core of mid-century European culture, a mate of Picasso and Lacan, but despised much of what we now think of as the greatest achievements of modernism. (His brother Pierre Klossowski, subject of a fantastic show at the Whitechapel Gallery in 2006, was the more progressive figure.) He was a vile anti-semite, despite his own possible Jewish ancestry. Born into something like genteel poverty, he later styled himself as a count and told Alberto Giacometti that he "needed a château more than a workman needed a loaf of bread". 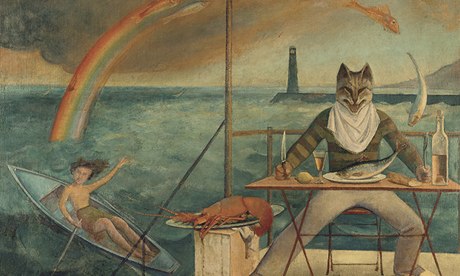 And, oh, he also had an inordinate fixation on girls who'd just hit puberty. "Little girls are the only creatures today who can be little Poussins," Balthus said late in life, and this show counterposes images of sly, knowing cats with ones of ostensibly innocent children. The Met, not imprudently, has put a plaque at the start of the show that reads: "Some of the paintings in this exhibition may be disturbing to some visitors." Only some visitors? They should disturb us all.
Thérèse Blanchard, his first muse (if you can use that word for a child), is shown reclining on a divan with her skirt hiked up, panties clinging to her inner thighs, while a cat sups milk from a saucer. Thérèse is depicted a second time, in bobby socks, splayed out on a bench and losing her balance. One girl is reading a book on the floor, her bottom hiked in the air; another lounges like an odalisque, gazing into a mirror while her bare leg dangles off a settee.
The girls are self-possessed and serious, and Balthus always denied any hint of paedophilia. But get real: these are erotic images of children. Some, especially the Thérèse portraits, show real invention and even a little humour that make them difficult to dismiss outright. Others, especially the mannered domestic scenes of his later career, are barely competent acts of voyeurism. Their inclusion here displays a welcome willingness on the part of the curator, Balthus specialist Sabine Rewald, to present the artist in full.
More a character study than a real retrospective, this show leaves out many of Balthus's most famous paintings to concentrate on two obsessions that end up rolling into one. Cats may seem anodyne fun to the legions of reblogging obsessives driving today's digital feline explosion. In Balthus's world, though, cats have a much more chilling flipside, and they stay with you long after the latest meme has faded.