When I woke up Tuesday morning, I didn’t expect to spend part of that afternoon bird-watching with Jonathan Franzen in Central Park. But there I was. 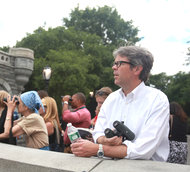 Hiroko Masuike/The New York TimesJonathan Franzen in Central Park on Tuesday.
Mr. Franzen, who appears in the forthcoming HBO documentary “Birders: The Central Park Effect,” was one of four birders who guided a group of about 15 through the park.
Before setting out on the walk, Mr. Franzen cheerily agreed that it wasn’t the right season for birding. “It’s the worst time.”
Strolling toward the park’s Ramble, Mr. Franzen said he first became deeply interested in birding about 10 years ago, when a relative took him to the park and explained some of its avian residents. “I thought I knew the park,” Mr. Franzen said. “I realized I didn’t know anything about the park at all.”
Since then, Mr. Franzen has written at length about his passion for birds, and the cerulean warbler was featured on the front cover and in the plot of his best-selling novel “Freedom.”

The first notable sighting Tuesday was a cedar waxwing. When I pointed at it to guide a fellow amateur’s eye, the birder Starr Saphir gently admonished me. It turns out that birding in a group requires suppressing the strong instinct to point toward your sightings. Sudden motion, even from a good distance, can spook birds into flying away.
The tour ended up at the park’s Belvedere Castle, where Mr. Franzen spotted an eastern kingbird near the water below us. He sounded excited, so I asked him if it was a rare bird. “No,” he said flatly, but then clarified that it was “rare for today,” given that only one family of the bird is likely in the park at this time of year.
We talked a bit more, and suddenly he shouted, “Red-tailed hawk!” and everyone lifted their binoculars in unison. The hawk, also rare for the season, was ascending, hectored by three much smaller birds looking to drive it away. “They’re like fighter jets on a 747,” Mr. Franzen said.