who suffered in silence

She has survived nearly 25 years in fashion, thanks to her ability to reinvent herself. Now a new book underlines her timeless appeal. But was she always happy? 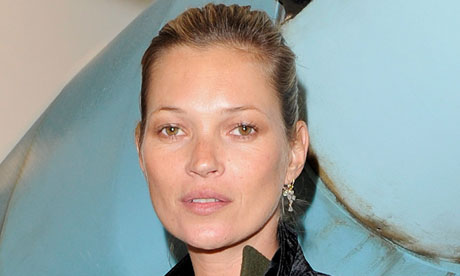 Kate Moss, the ultimate, yet vulnerable supermodel. Photo by Dave M Benett/Getty Images Photograph: Dave M. Benett/Getty Images
This week, a new coffee-table art book dedicated to Kate Moss is published. It's a deluxe retrospective of the world's most famous model's career, featuring photos by Mario Testino, Karl Lagerfeld and Hedi Slimane. Co-edited by Jefferson Hack, her ex and the father of her daughter, Lila Grace, it will no doubt be a thing of great beauty, but it won't attract half the fuss that last week's Vanity Fair interview with Moss has.

Born 1974, Croydon, to barmaid Linda Moss and Peter Moss, a travel agent. She was scouted at the age of 14 at JFK airport by Sarah Doukas of Storm Models. She started working with designer John Galliano at 15 and appeared on the cover of the Face magazine the next year. She has been British Vogue's cover girl more than 30 times.
Worst of times Her relationship with singer Pete Doherty, during which she was embroiled in the "cocaine Kate" scandal of 2005. She finally broke things off with Doherty in 2007.
Best of times Marrying Jamie Hince of rock band the Kills in July 2011. The wedding photographer was Mario Testino. The dress was designed by John Galliano and the guests included Jude Law, Stella McCartney,  Philip Green, Naomi Campbell, Anna Wintour and Marc Jacobs.
She says [on modelling] "It's an instinct. Nobody tells you what to do. So I have to feel, without any words, what they want and where the light is and how I'm going to make it work. It's a puzzle. That's what's good about it."
They say "For a bad girl she's always been very well behaved." Keith Richards