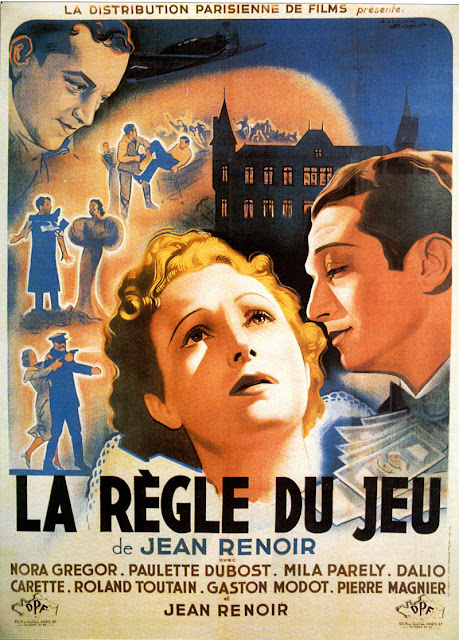 
I
was 19 or 20 when I first saw La Règle du jeu, or The Rules of the Game, by Jean Renoir. It was five years before I saw it for a second time but it remained in my head like a dream. I couldn't remember much detail, just the sense of the movie itself. So powerful. Watching it was an event for me, a movie event. In the 1960s it wasn't easy to see a film like this. There were several versions of it but there were no videos and no DVDs. Maybe a powerful film club was able to have a print delivered... but La Règle was hard to get hold of at all. Then, in the 1970s it became easier, and I saw it again. I went on to watch it every few years until I was about 50.


It was shot in 1938, just before the second world war. There is a scene where a group of people, gathered together for a long weekend at a villa near Alsace, go hunting. They start killing these birds and rabbits, and it becomes like a massacre. You cannot avoid thinking this was some kind of prophecy, about the massacre that would soon sweep over Europe.
Renoir is like a junction between the France of impressionism (the France of his father, Auguste Renoir) and the France of the 20th century. Sometimes it's as if he were making films about characters from his father's paintings. But what is really extraordinary about Renoir, particularly in La Règle, is that he loves all his characters. He loves the goodies and baddies, the ones who make terrible mistakes. He loves the ones who are on screen for just two minutes. This is something I have always tried to do. When I made my first film, at 21, I hadn't seen La Règle again. But it was always in the back of my head. Later, when I made an Italian epic called Novecento (released in the UK as 1900), I was filming a wedding scene, a long sequence, and I was feeling very influenced by Renoir. So at the end of it, Bob De Niro says: "It's late, it's going to rain soon, let's go back inside the house all together." There are the words from the end of La Règle.
I was casting for that film in Los Angeles when I received a call saying that Renoir had seen one of my films, had liked it very much, and wanted to see me. I went to his house in Bel Air with my wife. It was 1974 and Renoir was 80 years old, but he was so alert about everything. We spoke about practical things, shooting. It was like talking to a young man.
Bernardo Bertolucci is the Oscar-winning director of Last Tango in Paris and The Last Emperor

THE FILM THAT CHANGED MY LIFE