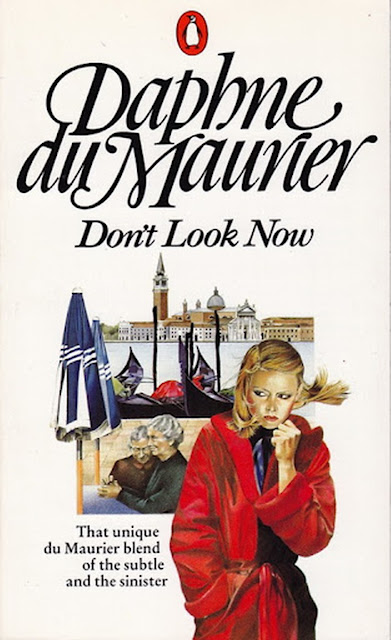 Daphne du Maurier's spooky Venetian tale is a masterclass in suspense. Or so I thought until I started reading your comments 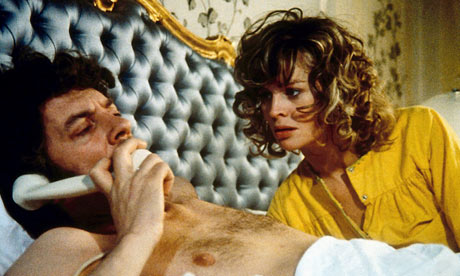 Don't Look Now: Nicholas Roeg's film version starring Donald Sutherland and Julie Christie. Photograph: Allstar/Cinetext/Casey
It isn't giving too much away to say that Don't Look Now ends unhappily. There's an aura of doom about the novella right from the get-go. It seems inevitable that things are going to go wrong – and the tension comes from finding out how – not if – Du Maurier's luckless protagonists are going to meet their end.

It is, as Patrick McGrath wrote in the Guardiana few years ago, "a deeply unsettling story". But what makes it so? McGrath continues: "Its power arises in part from its few supernatural effects, but is more a function of the slow, inexorable accumulation of incident and feeling that almost imperceptibly acquire a kind of critical mass, to the point that tragedy inevitably occurs – and when it does, it leaves the reader both shocked and relieved, for an intolerable tension has at last been relaxed. This is narrative control of a very high order."
Agreed.
I'm now hoping that we can look in more detail at the way in which Du Maurier creates that critical mass? How is it that from almost the first line we know something is going to go wrong – horribly wrong – even though that line is actually a joke?

"Don't look now," John said to his wife, "but there are a couple of old girls two tables away who are trying to hypnotise me."

Is it hindsight that makes that reference to hypnotism eerie? Perhaps – but that doesn't account for all the uneasiness in these opening pages. Is there something about the way the twins are staring at John and Laura, something hysterical about the couple's banter? Following on from the joke, most of the writing remains similarly light and frothy, but somehow that only serves to accentuate the dark shades, shown in Laura's "worried frown", and John's desire that she manages to "get over it" – whatever "it" may be. Quickly, the portrayal of the "almost exactly identical" twins starts to seem stranger and then comes the revelation that John and Laura's daughter has recently died. From then on (and especially if you're a parent), it's a story you feel not so much in your head as your stomach, where everything starts fluttering, tightening and aching… But why?
A poster on the Reading group Dan Holloway has already pointed outthat Du Maurier here employs one of "the great chiller staple themes… the notion that a character or set of characters seeks to escape a troubled situation by physical flight, only to find their troubles have not only follwed them but to their new destination but have become externalised there in the shape of some kind of semi-physical presence. It's a great metaphor for the way the mind turns on itself."
That's definitely true, and as Dan Holloway also said in that post, Venice becomes a potent symbol of that process, the city changed as John Self wrote in a review of the book from "city of romance to a tawdry, soiled backdrop for cruelty and paranoia." Venice's waters are dark in Don't Look Now, her pathways confusing, her alleys bleak, narrow, dangerous. John and Laura spend much of their time in the novella feeling lost and the effect is, well, haunting.
On the subject of haunting, Du Maurier is also an expert at weaving in strange portents, eerie reflections from the future – and also moments of relief that are actually unbearable because you just know they are temporary. For me, the most chilling incident came when John calls home, and actually gets to speak to Laura… But that's late on in the story. For now, I'm keen to hear your thoughts on the techniques Du Maurier uses to make even apparently happy moments so horrible – and how effective you feel they are. Before we get to that, however, a pleasing announcement. Thanks to the generosity of StudioCanal we have 10 DVDs of the celebrated Nicholas Roeg film adaptation of Don't Look Now to give away. (They're the latest DVD editions of the film, released just a few weeks ago on September 19, following on from a Blu-Ray special edition in July.) We'll send them out to the first 10 people who post below the line requesting one – so if you don't have a copy, now's your chance! Oh and if you haven't got a copy of the book yet, there's a tasty discount on the Penguin edition at The Guardian bookshop. We'll be discussing the film later on in the month, together with a great deal more. Watch this space!
STOP PRESS!
Just as I finished writing this piece I spotted two posts on the announcement page completely disagreeing with everything I've just written. Which is excellent news!
Semalo wrote: "The fright factor was totally missing for me." And Vishweshwer wrote: "Personally, I did not find anything exceptional in the story nor did it turn out to be "spooky", "spine chilling" "nightmarish" or "creepy" as it was adjectivised in the run-up to the choice."
So have I got it wrong? Is it actually not scary at all? All thoughts much appreciated.