Helene Schjerfbeck / The ghostly paintings of a famous Finn


Helene Schjerfbeck: the ghostly paintings of a famous Finn

Unless you’re Finnish, you probably won’t have heard of this enigmatic artist. Here’s why she matters


There’s a ghostly quality to Helene Schjerfbeck’s paintings. Her interiors and landscapes are devoid of people – a hollowness highlighted by a lone bench or clothes airing on a lawn – while her intimate portraits capture people in moments of quiet introspection. With their muted tones and hazy finish, the images look like they’re about to fade away before us. When she died in 1946, Schjerfbeck herself faded from the public eye – at least outside her native Finland, where she was and continues to be celebrated. An exhibition of her modernist portraits, landscapes and still lifes at the Royal Academy of Arts (RA) in London, whose curator describes her as “Finland’s Munch”, is sure to change that.

Schjerfbeck (pronounced sheriff-beck) was born in Helsinki in 1862. When she was four she fell down some steps and broke her hip and, to keep her entertained while she was convalescing, her father gave her some pencils. When she was 11 a teacher recognised her talent and her drawings were shown to Adolf Von Becker, a Finnish painter, who arranged for her to get a scholarship to the Finnish Art Society’s drawing school, becoming its youngest-ever student. In 1877, a year after her father died of tuberculosis, she joined Von Becker’s private academy and three years later moved to Paris on the back of a special grant.

After a broken engagement with a mysterious man to whom she referred as “the Englishman”, she moved over the channel, retreating to a friend’s house in St Ives, Cornwall. While she was there, her work was exhibited several times in London. In the early 1890s she visited St Petersburg, Vienna and Florence to make copies of masterpieces for the Finnish Art Society, which employed her as a teacher when she returned to Finland in 1896. Between lessons and, later on, caring for her ageing mother, she had little time to spend in front of her easel.

Schjerfbeck considered herself an outsider but in 1914 the Finnish Art Society commissioned her to paint a self-portrait – and her reputation grew. She had a solo show in Helsinki in 1917, when she was 55, followed by a second in Stockholm some 20 years later. Her work was also shown at the Paris Salon and in London, though a couple of exhibitions that would have furthered her career, including one in America, were cancelled due to the outbreak of the second world war.

Schjerfbeck’s works, 65 of which are included in this exhibition, riff on both Old Masters and contemporary currents, morphing from a naturalistic style to a resolutely modern and abstract approach that prefigured Francis Bacon and Frank Auerbach. She worked in various genres but it’s her self-portraits that stand out: searing studies in memory and mood. She flitted between fact and fiction – in her portraits she would use a model as a starting point then let her imagination fly. For Schjerfbeck, art was a way to explore the discrepancy between how we look and who we are. 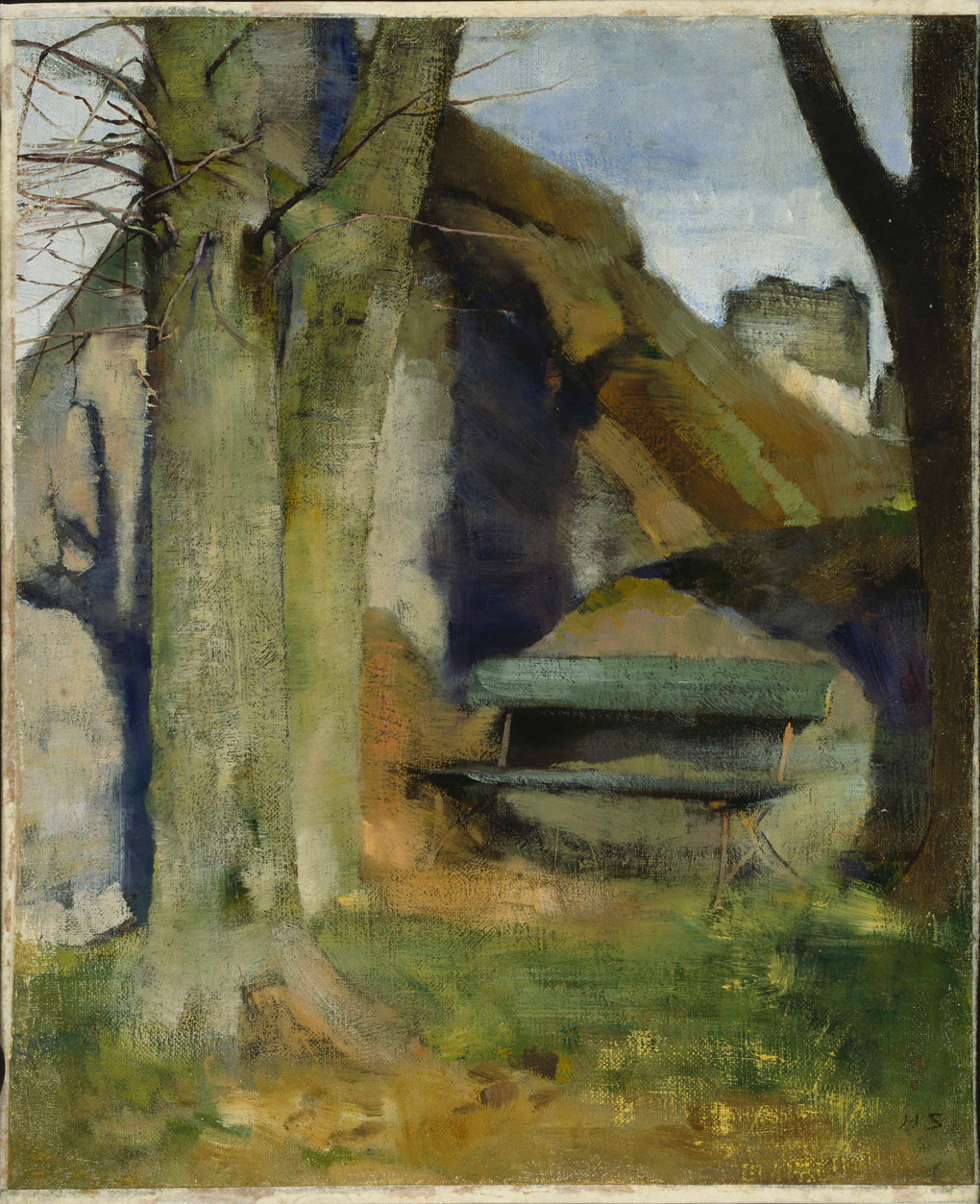 In late-19th-century Finland, which was part of the Russian empire, there was a growing nationalist movement, with artists coming under increasing pressure to paint historical scenes. Schjerfbeck was keen to escape these constraints. In the 1880s, while she was studying in Paris, she visited an artists’ colony in Pont-Aven in Brittany. She looked to the everyday for inspiration, painting modest interiors and unconventional landscapes. She concentrated on capturing an atmosphere. “Shadow on the Wall (Breton Landscape)” (1883) is framed by two trees that draw our attention to the wooden bench, as vacant and eerily still as the leafless branches above. The canvas is composed of muddy browns and mossy greens, shades that recur throughout Schjerfbeck’s work, especially towards the end of her life. 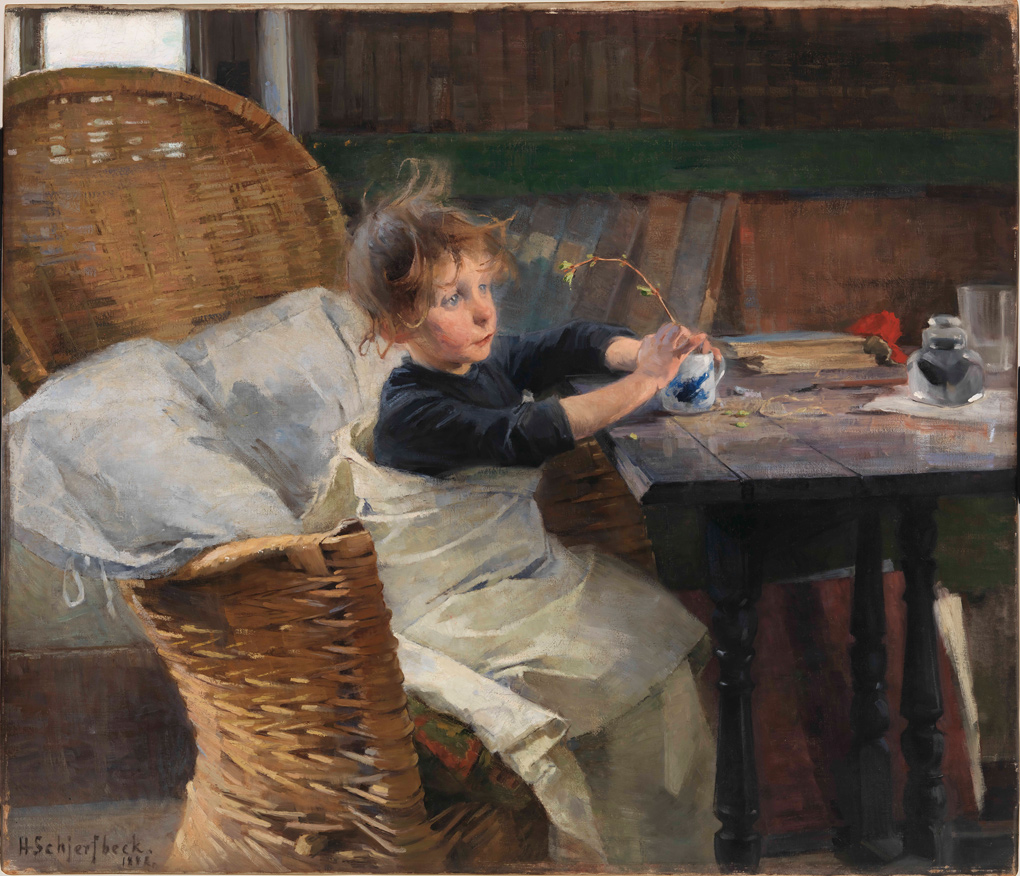 Schjerfbeck painted “The Convalescent”, which won a bronze medal at the Paris World Fair and has long been a favourite with visitors to the Ateneum, Finland’s national art museum, during the first of two visits to St Ives. She was staying with her friend and fellow painter Marianne Preindelsberger and her husband, the British artist Adrian Stokes – a couple she’d met in Pont-Aven. They introduced her to a thriving community of artists, drawn to Cornwall’s picturesque coast by its sandy beaches and humble fishermen. She began to pay greater attention to detail; look at the round-backed wicker chair – reeds woven together like the sheet half-wrapped around the child – and the squashy pillow, bearing the shape of the child’s back. There’s a fragility in the child’s wispy hair and glassy pale-blue eyes, echoed in the crooked sprig in the blue-and-white mug. It can be read as a self-portrait, drawing on Schjerfbeck’s memories of childhood convalescence and her recovery from her broken engagement. 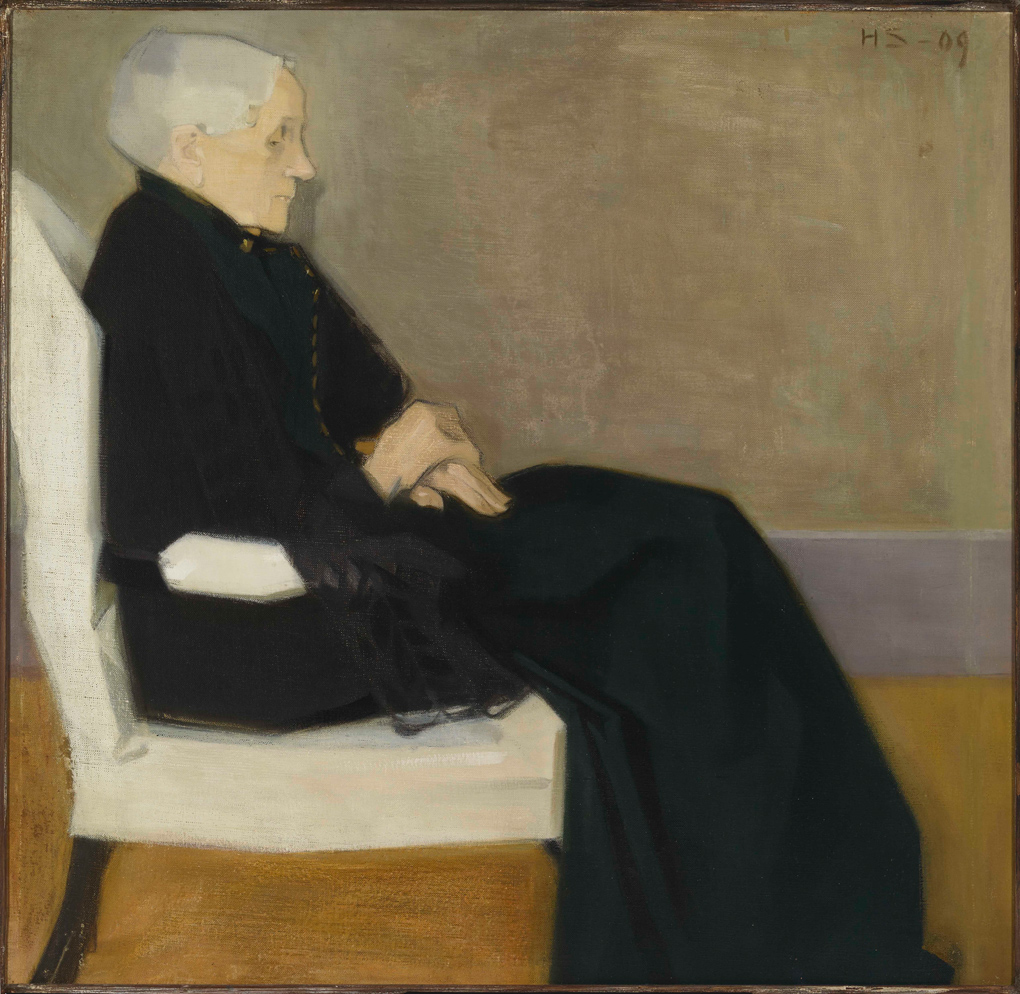 In 1896 Schjerfbeck moved with her elderly mother to the small town of Hyvinkää in rural Finland. “My Mother” (1909), one of a series of portraits she made of her, shows the influence of modernism on Schjerfbeck’s style. The large canvas is divided into flat patches of colour and simplified forms: a creamy chair, greyish-brown wall and ochre floor. In each portrait, her mother is dressed all in black and depicted in profile – a nod to “Whistler’s Mother” (1871), which she surely would have seen in Paris. But there’s no Victorian lacy bonnet to be seen – this old woman is defiantly modern. The melancholy pose – eyes downcast, chin tucked into chest, hands clasped firmly on lap – alludes to her mother’s illness and, perhaps, the burden Schjerfbeck felt as her sole carer. As with the majority of her portraits, the subject’s gaze is averted – there’s no direct engagement between the artist and sitter, or viewer. Instead, we feel as though we’ve walked in on someone in a moment of private reflection. 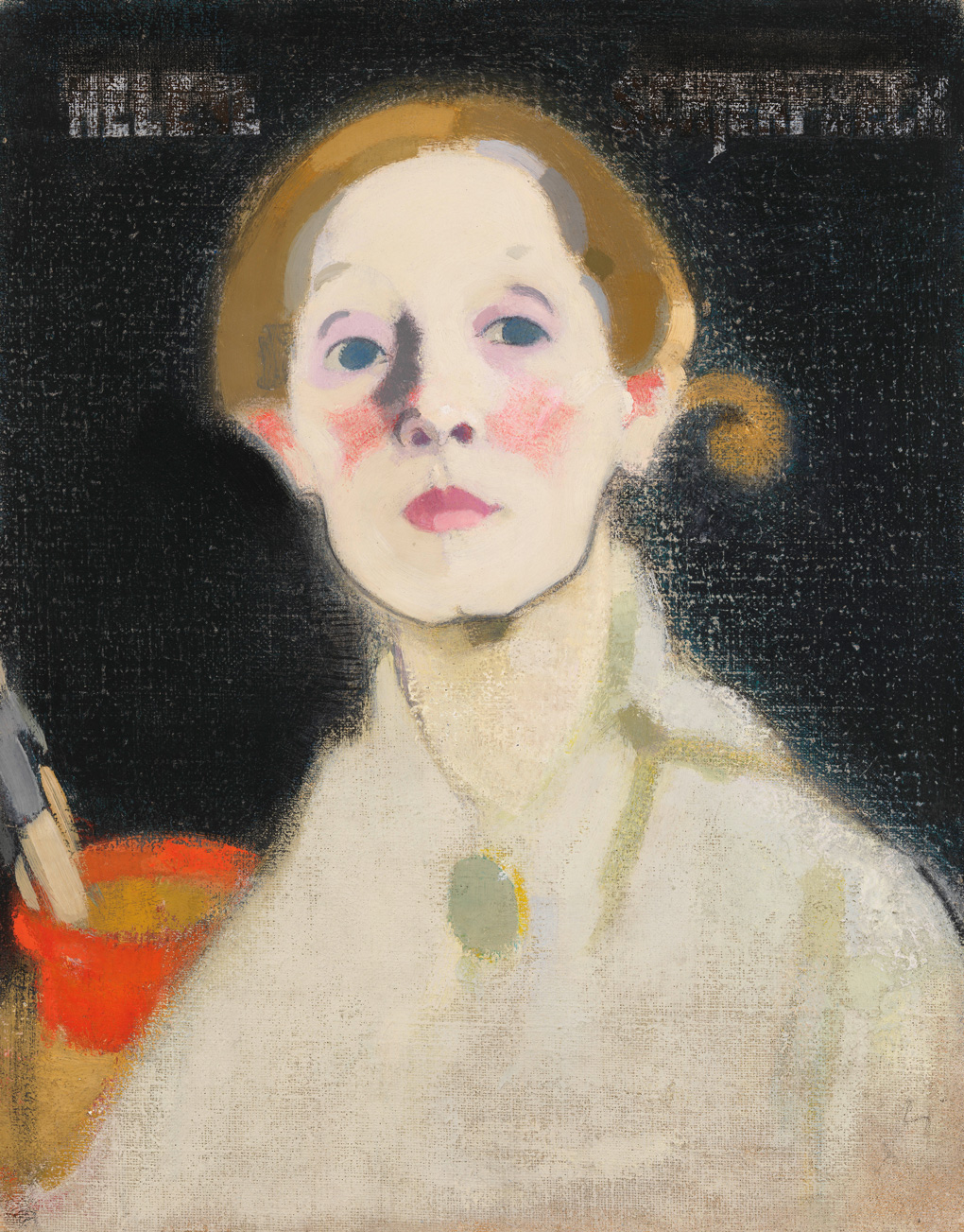 Schjerfbeck’s self-portraits became more abstract throughout her career. This, painted in the middle of her life, was commissioned by the Finnish Art Society. She has stencilled her name across the top in deliberately “faded” script – a reference to Hans Holbein, one of her favourite Old Master painters. With this, and the red-rimmed pot of paintbrushes Schjerfbeck declares herself an artist.

Her confidence is reflected in her pose: the tilt of her chin, her eyebrows raised as if to ask the viewer: what are you looking at? Unlike her impressionistic first self-portrait, created at the age of 22, which presents a fresh-faced girl, in this piece her face is daubed with chalky-white powder, her cheeks brought to life with rouge. 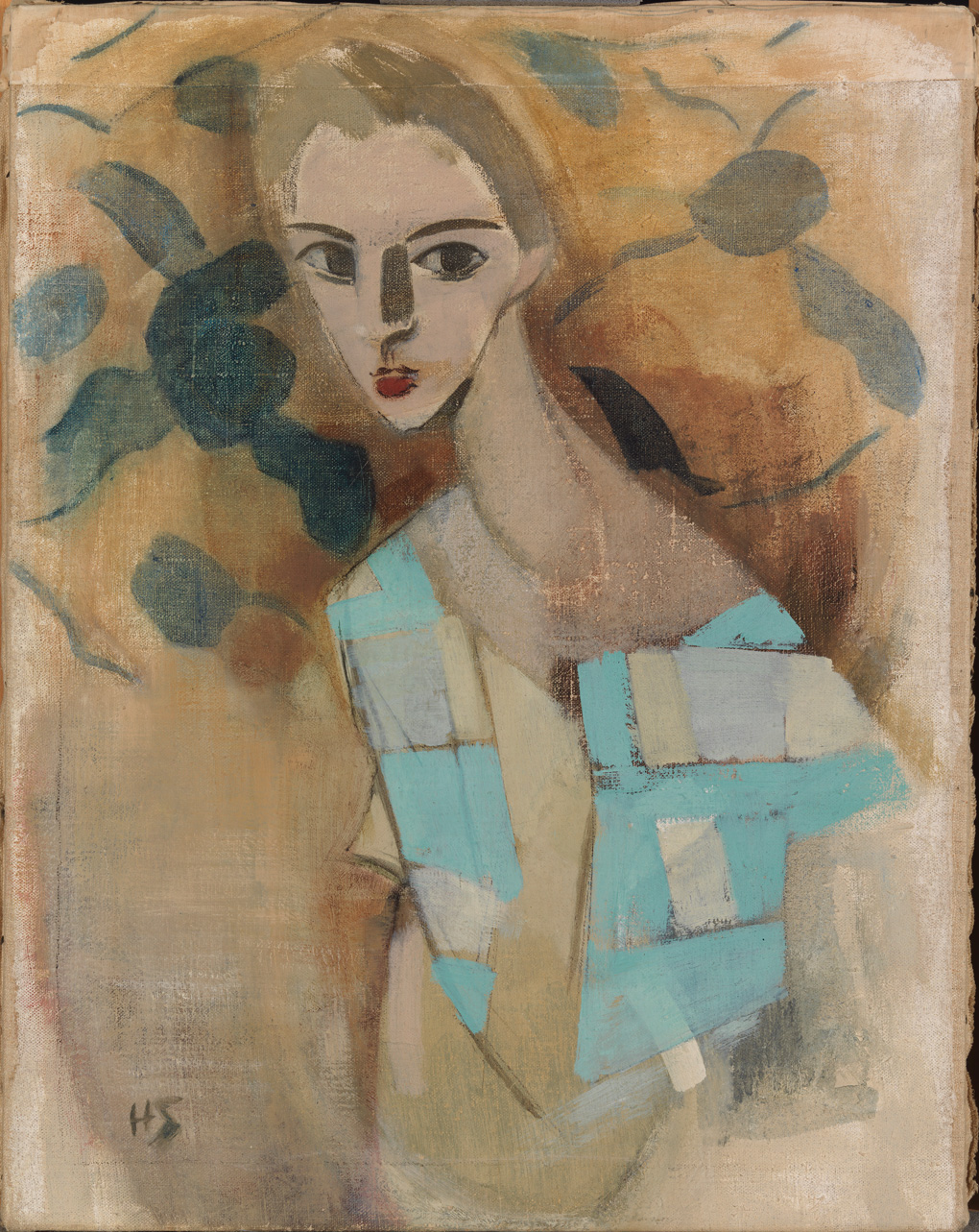 Schjerfbeck’s sitters were family, friends and models – mainly local factory girls and women whom she’d dress in her clothes. She was interested in fashion, subscribing to glossy French magazines like Marie Claire and ordering clothes from Galeries Lafayette in Paris. She painted girls in the style of the times: bobs, berets, crimson heart-shaped lips and feline eyes with winged lashes. But she also drew links with the past: here, she marries an El Greco-esque elongated neck and pointed chin with a stylised background and a modern patchwork bolero. As with the majority of her portraits, this sitter isn’t named – instead, she joins the artist’s cast of semi-fictional characters, which includes a seamstress, a skier, a sailor and a stubborn little girl. Schjerfbeck was more interested in capturing a mood than a faithful likeness: she observed a sitter or a scene and then fused it with images from memory or her imagination. 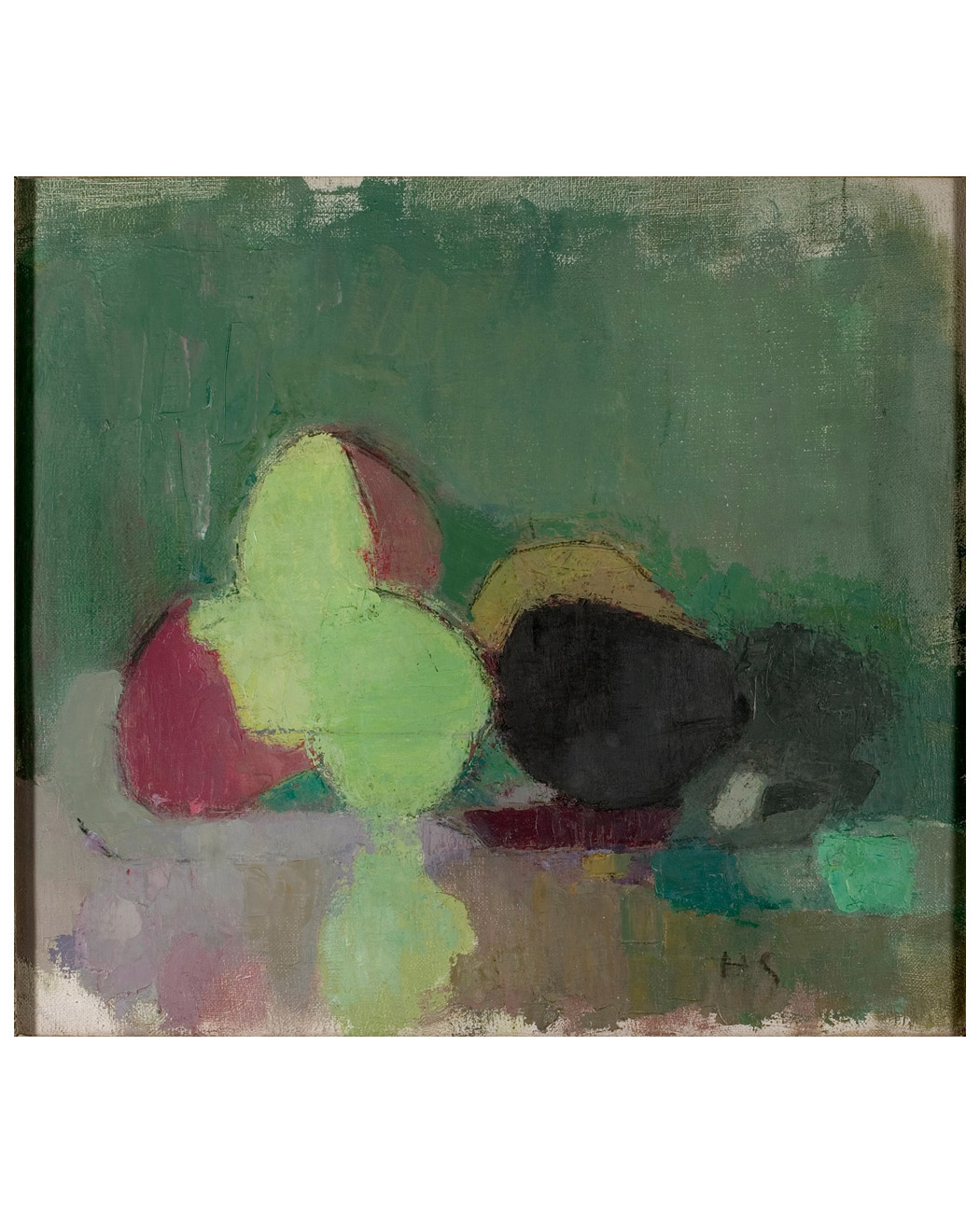 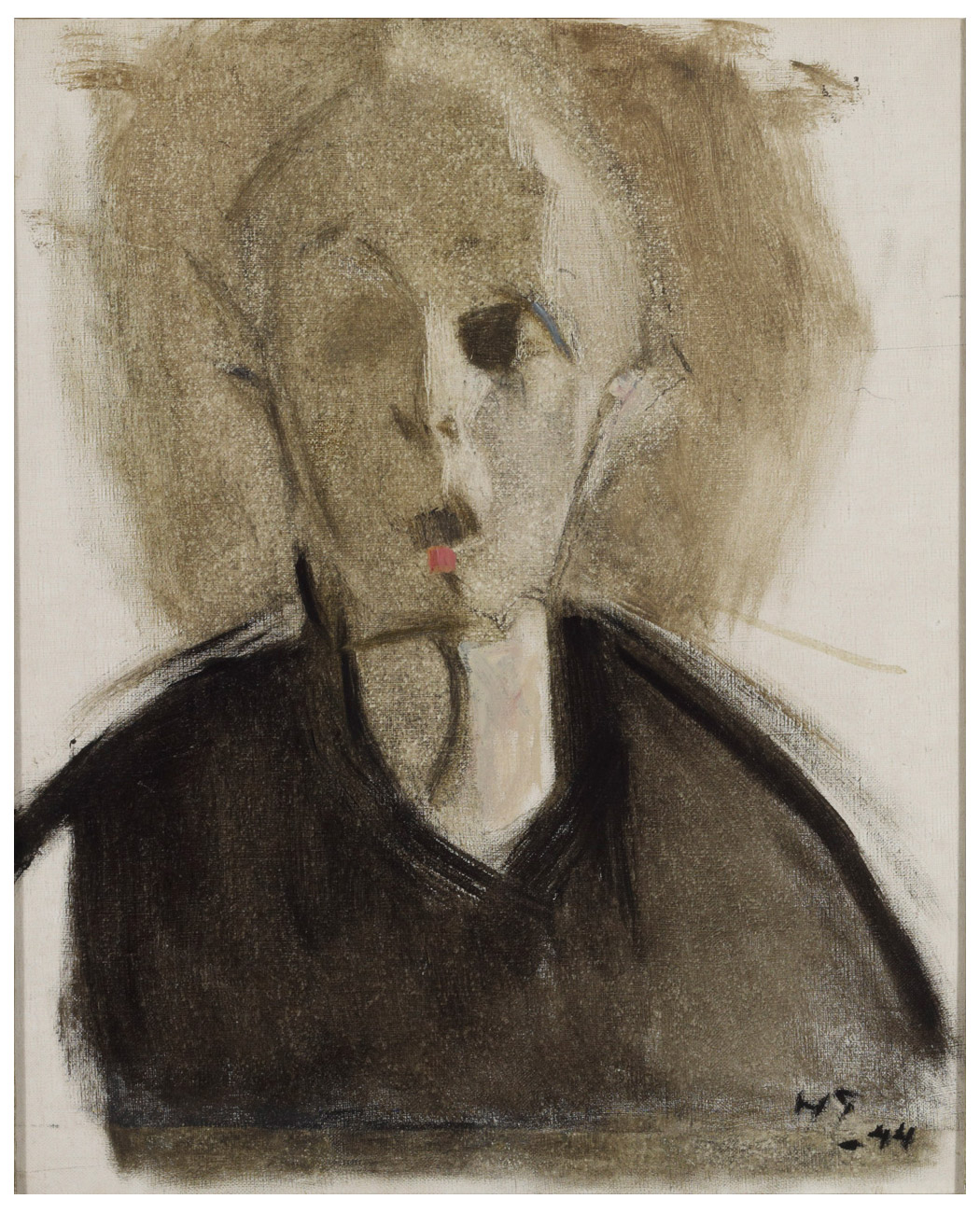 Schjerfbeck was 77 when the second world war broke out. In 1944 she moved to Sweden, where she continued to paint until shortly before she died. Life appears literally to be leaking out of these decaying apples – the acid-green skin of one seeping onto the table top. The self-portraits that she created during this period are similarly preoccupied with physical deterioration. Here is a woman coming to terms with her impending mortality; imagining, perhaps, what she might look like after death.