How we made The Last Days of Disco 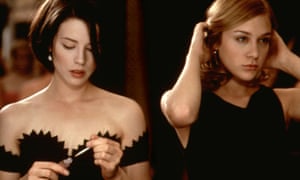 
How we made The Last Days of Disco

Kate Beckinsale and Whit Stillman on how their cult classic propelled them into a world of subway dancing, penthouse parties with DiCaprio – and free dessert

When I was living in New York and working on a newspaper, I’d get off work at 2am and we’d go to clubbing at Studio 54. There weren’t a lot of other places in the neighbourhood to go to. I had a tailor-made blue suit that was my sole legacy from my father. It was my magic charm for getting into the club. I was scared of Studio 54 at first – but it wasn’t in the least bit scary once you got in. My first date with my future wife was there.
Barcelona had been a very troubled shoot: one of the few happy times was when we filmed in a disco that belonged to friends. I’d been accused of making only dialogue films, so I thought it would be beautiful if we shot a whole film in a disco. Castle Rock, who produced Barcelona, wanted to announce my next film – so they did, before I’d even starting writing The Last Days of Disco. This was a problem because another disco-era film, 54, was also in production. Castle Rock did not want to come out second. It put our casting under huge pressure.I had this idea for this over-the-top character, a kind of world-beater. I happened to see John Schlesinger’s Cold Comfort Farm, and I could see Kate Beckinsale as very close to Charlotte in Last Days of Disco. Charlotte is very much a Jane Austen character, and Cold Comfort Farm was based on Austen’s Emma. We were about to cast Winona Ryder as Charlotte’s friend Alice, but my editor on Barcelona had been telling me how much I’d like Chloë Sevigny. The casting people were against her, but her audition was fantastic.
We had a $9m budget, and I wanted to knock everybody’s eyes out. We shot the club scenes in the Loew’s Jersey theatre, a baroque 1920s cinema. We were sharing it with Illuminata, a John Turturro film; they paid for the red carpeting, we paid for everything else. It was an enormous amount of work and money to fit it out, and then you have to people it with extras. In retrospect, I should have shot in a tiny little club like in Barcelona, where you put in 30 people and it looks massively crowded. But most of the extras worked as waiters, so I got many excellent free entrees and desserts in New York for the next few years.


I was in self-indulgent mode, and Castle Rock were really supportive. I elongated the shoot to 50 days, when I usually do it in less than 30. The final scene, where we break the realism and everybody on the subway starts dancing to Love Train, was shot in a defunct station attached to a transport museum; we could control a train going in and out. It’s a bunch of New York background actors who you’d normally never see dancing on screen because they don’t look young and cool. It’s great to have all these unlikely looking people cutting loose.
There were so many things working against us commercially. Boogie Nights, which came out the year before, whetted everyone’s appetite for a different kind of film: it made that disco era seem very porno and extreme. It only made $3m – the soundtrack was a bigger hit than the film. People said, “Disco wasn’t like that.” And I would say, “Which clubs did you go to?” And they’d say: “I only liked punk.”

I only realised 20 years later that Whit had written the part for me. He never said anything, before, during or after making the film. I was offered the part at the same time as the opportunity to do Patrick Marber’s Closer at the National. I made my decision based on which made me the most anxious. This was such a stretch: I was very, very English.
I had watched quite a lot of Scorsese and turned up in New York frightened I was going to get cheese-wired on the corner of every block. Whit’s script was so funny. I remember looking at the scene in which the characters discuss the sexual politics of Lady and the Tramp, thinking: “My God, this guy’s deranged.” It’s like when you’ve got kids who are getting older and they’re having very intense philosophical discussions. It’s weirdly, wistfully amazing.


The dancing scenes weren’t hard – Whit didn’t want anything outre. We were all twentysomething actors, having a great time doing this job. Chloë, who at that point was the queen of everything cool, was really generous. She had this very fancy fur coat of a social life that she wore very casually and was very happy for you to try on. I’d find myself at a party in a palatial penthouse flat with Leo DiCaprio there.
I was OK with the film’s box-office failure, because that wasn’t how I measured its success. I had done the thing I found scary, and made lots of lifelong friends. And, over the years, I find people keep bringing up the film. Maybe its 20-year-anniversary tagline should be: why didn’t I watch it earlier?
THE GUARDIAN

Posted by Ficciones at Saturday, September 21, 2019

Email ThisBlogThis!Share to TwitterShare to FacebookShare to Pinterest
Labels: Film, How we made, Kate Beckinsale, Phil Hoad, Whit Stillman