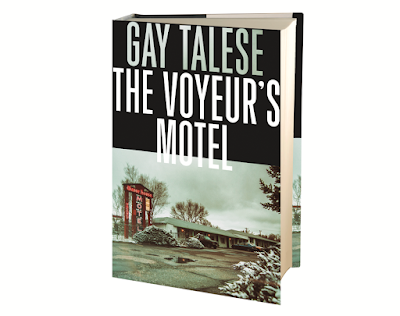 
‘Gerald and I looked through the vents and saw a male having intercourse. I noted that Gerald ejaculated at 7.51pm’


I know a married man with two children who bought a 21-room motel near Denver many years ago in order to become its resident voyeur. I first became aware of this individual in 1980 when my valet handed me a letter that had been sent to my $5m home in New York.
Dear Mr Talese, as the author of Thy Neighbor’s Wife, the brilliantly written exploration of American sexual mores that has now been in the bestseller lists for over six months, I thought you might like to know about my adventures as a Peeping Tom. Yours, Anonymous.
For several days, I left this letter to one side as I had more important matters to attend to, namely designing the monogram for my blazer. Since my correspondent refused to be named, I felt there was little to be gained from meeting him as my deservedly award-winning non-fiction had always been predicated on full disclosure. And yet I had to concede that his letter was not without merit as it did acknowledge me as the finest living writer of my generation. So I replied, using my Montblanc fountain pen, that I would meet him at baggage reclaim 4 at Phoenix airport, at some point in the future when I had finished my nationwide tour promoting yet another of my brilliant books.

He was sat on a pale tangerine banquette near baggage reclaim 5 when I arrived in Phoenix shortly after four in the afternoon of 23rd January. After I rebuked him for his impertinence in waiting in the wrong place, thereby delaying me for at least 12 seconds, he lead me out to his highly polished black Cadillac sedan. “Good day,” he said, as the sun beat down from what I recall was a deep-azure sky. “My name is Gerald Foos.”
Gerald, as he preferred to be called, introduced me to his wife Donna, whom he assured me was highly approving of his voyeurism, which he insisted was an important social history of the sexual activities of his motel guests. Gerald and Donna took me up to the secret attic from which they could spy on their guests though the vents. “Look down there,” he said. I leant forward to observe a white male of about 195lb having intercourse with a slight woman of Spanish descent with thick black pubic hair. As I leant further forward, my silk Ralph Lauren tie slipped through the vent: Gerald pulled me back, lest our voyeurism became public, before continuing to masturbate. I made a note that Gerald had ejaculated at precisely 7.51pm.
On my return to my New York home that had appreciated in value by $145 in my absence, Gerald began to send me weekly instalments from his meticulously observed notes.
“A short fat man urinates in the sink while his wife is out. On her return, she performs fellatio on his below-average-size penis. He then mounts her in the male superior position and thrusts forcefully for about five minutes before climaxing. The woman does not appear to climax. Conclusion: this couple have a serviceable, if not particularly joyful, union. The rather small amount of semen the man ejaculates suggests he is a frequent masturbator.”

To my surprise, I sense there is some nobility in Gerald’s enterprise and I recall a book written by a professor who is not quite so brilliant as me, in which Victorian sexual activity was explored through the prism of voyeurism. I ask Gerald to send further extracts of his diary.
“There is no moral problem with voyeurism because the people being watched don’t know they are being watched so they can’t be hurt. I find this immensely reassuring when some of my own semen slips through the vent on to the face of a well-built brunette woman who has just swallowed the semen of a slight Caucasian man of about 157lb. I also observe a man strangling a woman and feel a bit guilty about not reporting it, though am aware that doing so would compromise my objectivity.”

At some point, it becomes clear to me that Gerald’s diary actually begins three years before he bought the motel, but I am inclined to treat this as an administrational error on Gerald’s part. In 2013, Gerald, who is now in his 80s, rings up to say that the motel has been knocked down and he is now happy for me to publish a book about him using his real name.
I agree, though the extract about the killing still bothers me. I ring up the Denver police department, who inform me they have no record of any homicide at the motel. The incompetence of the Denver police, in not responding to a crime that definitely took place, is breathtaking. At some point I might write an award-winning book about them. For now, though, satisfied that my own extensive research is complete, I decide to publish the most important work of non-fictional fictional bollocks ever in the history of non-fictional fictional bollocks.
Digested read, digested: Foos’ gold.
THE GUARDIAN