Katherine Anne Porter / A brief survey of the short story

A brief survey of the short story part 53

Full of both concrete and hallucinatory detail, Porter's slender output includes some of the very best American stories


Katherine Anne Porter lived a long life but published sparingly. Her bibliography is patchy despite its slightness – 27 stories and one novel – and yet a handful of her stories rank among the best in American literature, fired by a voice and quality of insightfulness that no other writer shares. Her style, a particularly lucid strain of modernism, was formed from channels cut by Henry James, Willa Cather and James Joyce, and made its own pronounced impression on her fellow southerners Eudora Welty, Flannery O'Connor and Carson McCullers. But there is something set deep within her writing that bears no marks of influence, and is not found elsewhere. This unique quality is surely the reason why she can make a serious claim for greatness from a relatively modest platform.
Porter grew up poor, scion of a once grand Louisianan family shunted by circumstance to rural south Texas. Like John Cheever, she devoted considerable energies to convincing people of her august lineage. This makes her sequence of "autobiographical" stories (which feature Porter's fictional alter-ego, Miranda) even more remarkable an achievement, because they are not drawn from life as they appear to be. When she was 30, after a brief, radicalising spell in New York, Porter travelled to Mexico to witness and to an extent participate in the cultural revolution under Álvaro Obregón. Her first stories, written in the early 1920s, take Mexico as their setting.
"Flowering Judas" (1930) took longer to emerge, and is the most extraordinary of Porter's Mexican stories. It blends religious faith, political belief and eroticism in a narrative that feels at once concrete and hallucinatory. Laura, a young, idealistic American, is committed to socialism, but still "slips now and again into some crumbling little church" to pray. The labour leader Braggioni, whose body "swells with ominous ripeness", tries each night to seduce her. Disillusioned, Laura sees Braggioni as a betrayal of the revolutionary ideal, and at the same time realises that her idealism is romantic nonsense. Yet she still runs Braggioni's errands, smuggling pills into prison for a fellow revolutionist who uses them to kill himself. In the story's final sequence Laura dreams that the suicide returns to punish her act of betrayal, each strand of the story combining in a charged and horrific vision. 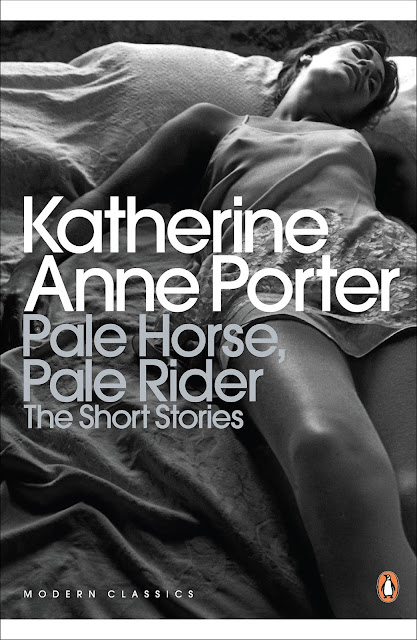 Betrayal, which as Charles Baxter has observed "gives off a very particular hum" in Porter's work, defines another of her masterpieces, "Noon Wine" (1937). The story describes a failing Texas dairy farm and the hiring of a stranger, the taciturn Swede Mr Helton, whose industry turns around the fortunes of the Thompson family. A decade later another stranger arrives at the farm gate, the bounty hunter Homer T Hatch, who is intent on running Mr Helton to ground for a crime he committed in North Dakota 10 years before. Mr Thompson, however, doesn't want to let him go. The confrontation between Thompson and Hatch is one of the great scenes of American literature: menace throbs beneath a veneer of civility, and the mood shifts queasily between humour, pettiness and grave threat. When Thompson kills Hatch he is cleared by a jury, but cannot shake his sense of guilt. Like the unfortunate peasant in Guy de Maupassant's "A Piece of String", he spends days travelling the countryside explaining what happened to his neighbours but failing to convince them, or himself, of his innocence. His great act of betrayal is to involve his wife in this process, a decision that demeans her and leads to his suicide. An explanation for the extraordinary power of "Noon Wine", which has often and understandably been described as a modernist Greek tragedy, is given by Porter in a 1956 essay: it is "a story of the most painful moral and emotional confusions", she writes, "in which everyone concerned, yes, in his own crooked way, even Mr Hatch, is trying to do right".
Thompson's suicide is described with a haunting simplicity: "Taking off his right shoe and sock, he set the butt of the shotgun along the ground with the twin barrels pointed towards his head. It was very awkward. He thought about this a little, leaning his head against the gun mouth". The passage exemplifies the command Porter shows when writing about death. She nearly died after contracting Spanish flu in Denver in 1918, and in her fictionalised account, the 1939 story "Pale Horse, Pale Rider", death appears to Miranda in a fever dream as a stranger who "leaned far towards her and regarded her without meaning". In the surging stream of consciousness narrative "The Jilting of Granny Weatherall" Porter goes further still, to the threshold of death and beyond:

Her heart sank down and down, there was no bottom to death, she couldn't come to the end of it. The blue light from [the] lampshade drew into a tiny point in the centre of her brain, it flickered and winked like an eye, quietly it fluttered and dwindled. Granny lay curled down within herself, amazed and watchful, staring at the point of light that was herself; her body was now only a deeper mass of shadow in an endless darkness and this darkness would curl around the light and swallow it up.

The passage prompts – and earns – comparison to Tolstoy, who, more than any other writer, keeps returning to the moment of death in his fiction (think of that "black sack into which an invisible, invincible force" is thrusting Ivan in "The Death of Ivan Ilyich").
As Granny Weatherall lies dying her mind roves the past, which in Porter's work is an involute and inescapable territory. All of her characters find themselves tightly enmeshed in personal and collective memory, an active force that limits and often determines their actions. To escape this hold, it seems, requires escaping life itself; in "Pale Horse, Pale Rider" it is only when Miranda is on the brink of succumbing to her illness that she discovers "There were no longer any multiple planes of living, no tough filaments of memory and hope pulling taut backwards and forwards holding her upright between them". Porter's most complete exploration of this theme is "Old Mortality" (1937), a long, tripartite story exploring the myths families construct around themselves, and the tension younger family members experience as they try to break free of them. At the story's end Miranda rejects the oppression of tradition, but the final line – arriving like a blow – describes "her hopefulness, her ignorance", and implies that her supposed escape is only the next wave of myth making in process. As this suggests, Porter is a fatalist, which explains why her endings so often feel absolutely necessary. "The reader expects," the novelist Penelope Gilliatt once noted, "some counter-twist on the last pages, but no such trick. The end is a true end, and the truth of its acceleration comes when you read any of her finest stories a second time."
Which is not to say Porter's stories are programmatic. They are too intensely realised for that. They possess, in Robert Penn Warren's memorable description, "rich surface detail scattered with apparently casual profuseness", but beneath it rests "the close structure which makes such detail meaningful". Porter denied the deliberate presence of symbolism in her work – "I never consciously took or adopted a symbol in my life", she told an interviewer in 1963 – but intention, whether or not she was speaking truthfully, is beside the point here. Great stories generate their own meanings, and take on new life in the mind of each reader. Porter's stories are of the past, but they remain active and alive.