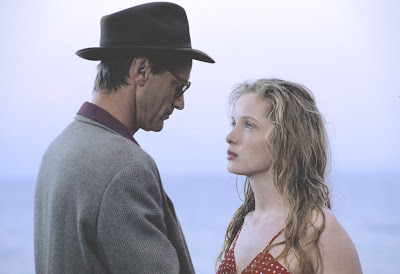 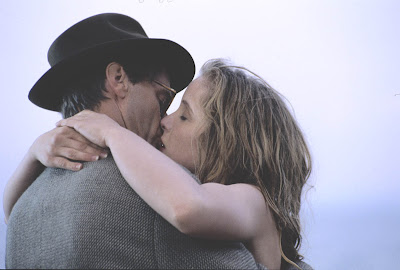 A convergence of elements has led me to an obsession with Sam Shepard. You simply cannot forget the him in Days of Heaven. I saw the film first many years ago, and I watch it a couple of times a year- whenever I want that heart worn West feeling that he especially imparts. All his bit parts and other roles are worth loving; like Dolly Parton's husband in Steel Magnolias, the real love in Frances, and Yeager in The Right Stuff.
While I was in Cuba last month I finally got around to reading that hit bio of Patti Smith's Just Kids, and while her relationship with Mapplethorpe was the heart and soul of the story, it was her time with Sam Shepard I found most intriguing. She writes, "With Sam I could be myself." That is all I've ever wanted, and I loved reading that Smith valued that too. Their relationship seemed to bring out good things in each other. He urged her to write, she urged him to be a rock star. At the end of their romantic time in New York (they've since remained good friends) he left for his farm in Nova Scotia, giving her a bit of last minute advice.
'He looked at me, my cowboy with Indian ways. "You know, the dreams you had for me weren't my dreams," he said. "Maybe those dreams are meant for you."'
Gifts of guidance, protection, faith. What more could you ask for, when you have to part ways?
Then there was the other evidence to deal with, that poked out at me, and reminded me of my hometown pride. He had a farm in Nova Scotia. He had a farm in Nova Scotia? Wait. What? Where?
I forgot about this book I read last summer that I liked so much, Norman Howard's My Famous Evening: Nova Scotia Sojourns, Diaries and Preoccupations, which located said farmhouse; the writer admitting far too casually that after some great bird-watching he dropped by famous playwright and actor Sam Shepard's old house, nestled along the Bay of Fundy.
Growing up in a small town at the very point of the Bay of Fundy, where it narrows into the highest tides in the world- pushing into the Salmon River, I immediately thought of Maitland and Parsboro, villages to the left and right of my own, sweet places that, in their beauty and isolation, were deserving of such occupancy. I bet he lived in either one of those towns, or just on their edge. I bet his Nova Scotia farmhouse was the inspiration for the farm in his Pulitzer prize-winning play Buried Child too.
In a sweet twist Shepard's Nova Scotia connection was further illuminated by Joni Mitchell. Mitchell played a couple of dates on Bob Dylan's Rolling Thunder Revue and Shepard was also there. Dylan had contacted Sam Shepard to come along on the tour to help write or "set the scene" for a film Dylan was going to write and shoot while touring. This film became Reynaldo and Clara. The Rolling Thunder Revue, like Joe Cocker's Mad Dogs and Englishmen Tour, The Great Rock and Roll Circus, or Festival Express, bubbled over with talent, tomfoolery and tension. The mixed bag of creative types fell upon each other, and then parted to deal with the ramifications of the exchanges. Dylan was wiped from the tour and didn't perform or record for nearly two years. Reynaldo and Clara was panned when in came out in 1978. Shepard is uncredited as a screenwriter in the film, but has a small acting role, essentially playing himself. Shepard instead published a loose journal called The Rolling Thunder Logbook while Mitchell used the experience to write songs for her album Hejira, which came out the next year. The affair between Mitchell and Shepard is noted in key references throughout its hit song 'Coyote'. Sam Shepard is Coyote. You can see it in his eyes.
Bare with me here while I go through the most obvious lines, it's kind of fun.

(The farm on the Bay of Fundy, his love of horses, his ranch and the Fundy tides, his writing/screenwriting/ known for travelling with a typewriter).
So Joni and Sam had a brief affair, after Patti but before Jessica. Poor O'Lan Jones, Sam's wife from 1969 to 1984. Must have been hell. He's been married to Jessica Lange since the O'Lan divorce, and better for it.
So that's it. The guy is such a rogue, a cowboy, and a coyote, and I love it. He is a Pulitzer prize winning playwright, as well as an author of short-stories, poetry and memoirs. He wrote the screenplay for Wim Wenders' Paris, Texas for christ sakes! He is a musician, had a song on the Easy Rider soundtrack, and played banjo on Patti Smith's recording of "Smells like Teen Spirit". A big hulk of a ladies man with sweet sensitive underpinnings, a free spirit, a drunk! You can read all about Sam Shepard on Wiki, I don't need to fill you in on his drumming skills, or battle with the bottle, or his three kids. But do look him up, I think he's fascinating.
My plan now is to read his stuff until I get bored, and to find out the exactly location of the Nova Scotia farm. I went to Stratford this past weekend to visit with LD, and picked up a couple of his plays at one of my favorite second hand bookshops, Yesterday's Things and Books, and started to read Angel City on my train ride home. What an erudite joker! Smart, but with great feeling. Maybe I'll put one of Shepard's one-man plays in the fields at the farm, and you can all come out and see it. That seems a good homage to the original birdfox. He's got a great snaggletooth too.

Posted by Ficciones at Wednesday, December 21, 2011