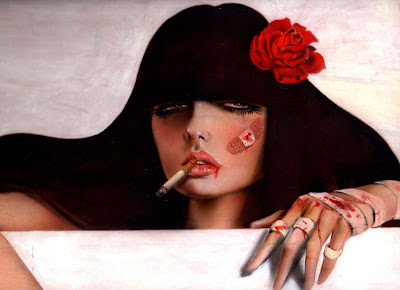 THE HAND
By Patricia Highsmith

A Young man asked a father for his daughter’s hand, and received it in a box  — her left hand.
Father: ‘You asked for her hand and you have it. But it is my opinion that you wanted other things and took them.’
Young man: ‘Whatever do you mean?’
Father: ‘Whatever do you thing I mean? You cannot deny that I am more honourable than you, because you took something from my family without asking, whereas when you asked for my daughter’s hand, I gave it.’
Actually, the young man had not done anything dishonourable. The father was merely suspicious and had dirty mind. The father could legally make the young man responsible for his daughter’s upkeep and soak him financially. The young man could not deny that he had the daughter’s hand  —  even though in desperation he had now buried it, after kissing it. But it was becoming two weeks old.
The young man wanted to see the daughter, and made and effort, but was quite blocked by besieging tradesmen. The daughter was signing cheques with her right hand. Far from bleeding to death, she was going ahead at full speed.
The young man announced in newspapers that she had quit his bed and board. But he had to prove that she had ever enjoyed them. It was not yet ‘a marriage’ on paper, or in the church. Yet there was no doubt that he had her hand, and had signed a receipt for it when the package had been delivered.
‘Her hand in what?’ the young man demanded of the police, in despair and down to his last penny. ‘Her hand is buried in my garden.’
‘You are a criminal to boot? Not merely disorganized in your way of life, but a psychopath? Did you by chance cut off your wife’s hand?’
‘I did not, and she is not even my wife!’
‘He has her hand, and yet she is not his wife!’ scoffed the men of the law. ‘What shall we do with him? He is unreasonable maybe even insane.’
‘Lock him up in an asylum. He is also broke, so it will have to be a State Institution.’
So the young man was locked up, and once a month the girl whose hand he had received came to look at him through the wire barrier, like a dutiful wife. And like most wives, she had nothing to say. But she smiled prettily. His job provided a small pension now, which she was getting. Her stump was concealed in a muff.
Because the young man became too disgusted with her to look at her, he was placed in a more disagreeable ward, deprived of books and company, and he went really insane.
When he became insane, all that had happened to him, the asking for and receiving his beloved’s hand, became intelligible to him. He realized what a horrible mistake, crime even, he had been guilty of in demanding such a barbaric thing as a girl’s hand.
He spoke to his captors, saying that now he understood his mistake.
‘What mistake? To ask for a girl’s hand? So did I, when I married.’

The young man, feeling now he was insane beyond repair, since he could make contact with nothing, refused to eat for many days, and at last lay on his bed with his face to the wall, and died.