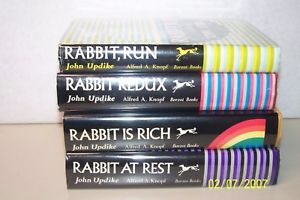 When Julian Barnes first read the Rabbit quartet on a book tour of the States he was overwhelmed by Updike's joy of description. Twenty years later, he still thinks it is the greatest postwar American fiction

hen a writer you admire dies, rereading seems a normal courtesy and tribute. Occasionally, it may be prudent to resist going back: when Lawrence Durrell died, I preferred to remain with 40-year-old memories of The Alexandria Quartet rather than risk such lushness again. And sometimes the nature of the writer's oeuvre creates a problem of choice. This was the case with John Updike. I have only ever met one person – a distinguished arts journalist – who has read all Updike's 60-plus books; most of us, even long-term fans, probably score between 30 and 40. Should you choose one of those previously unopened? Or go for one you suspect you misread, or undervalued, at the time? Or one, like Couples, which you might have read for somewhat non-literary reasons? 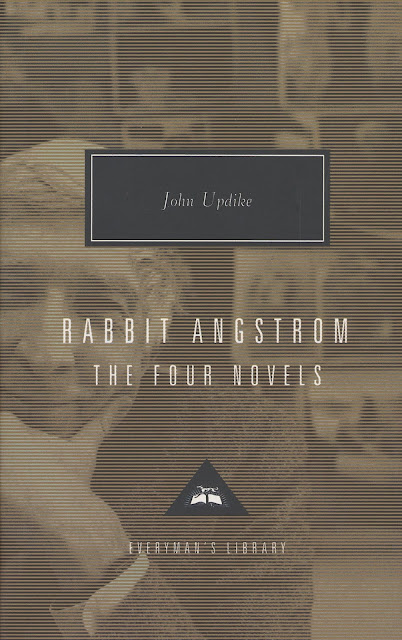 The decision eventually made itself. I had first read the Rabbit quartet in the autumn of 1991, in what felt near-perfect circumstances. I was on a book tour of the States, and bought the first volume, Rabbit, Run, in a Penguin edition at Heathrow airport. I picked up the others in different American cities, in chunky Fawcett Crest paperbacks, and read them as I criss-crossed the country; my bookmarks were the stubs of boarding passes. When released from publicity duties, I would either retreat inwards to Updike's prose, or outwards to walk ordinary American streets. This gave my reading, it felt, a deepening stereoscopy. And even when, too exhausted to do anything, I fell back on the hotel minibar and the television, I found I was only replicating Harry "Rabbit" Angstrom's preferred way of ingesting politics and current events. After three weeks, both Harry and I found ourselves in Florida, "death's favourite state", as he puts it in the final volume, Rabbit at Rest. Harry died; the book ended; my tour was over.

I came home convinced that the quartet was the best American novel of the postwar period. Nearly 20 years on, with Updike newly dead, and another American journey coming up, it was time to check on that judgment. By now those four volumes had been fused into a 1,516-page hardback under the overall title Rabbit Angstrom. If the protagonist's nickname denotes a zigzagging creature of impulse and appetite, the angst of his Scandinavian surname indicates that Harry is also the bearer of a more metaphysical burden. Not that he is more than fleetingly aware of it; and the fact that he isn't makes him all the more emblematically American. John Cheever once said that Updike's characters performed their lives amid a landscape – a moral and spiritual one – of whose grandeur they were unaware.